Oooh, I usually sort of hate Christmas movies. Too much spirit and guilty messages, not enough parties. Also giant family movies like this one means a lot of interweaving storylines that will PROBABLY end with everyone having a happy ending so it isn’t too creative in its execution. You can see them a mile away.

So Almost Christmas is coming out over a month before Christmas. I guess it is coming out in Almost Almost Christmas time. Christmas and the week before are now synonymous with great movies and mini-blockbusters, not actually thematic holiday films. And since no one makes a movie about Thanksgiving (except for Planes, Trains, and Automobiles), basically any part of November can count for Christmas.

This is a much bigger project than anything David E. Talbert has done before, and I assumed that Malcom D. Lee was the director when I saw the cast size. (He did The Best Man Holiday and other films). But hey, lets give him a shot and hope I don’t fall asleep. 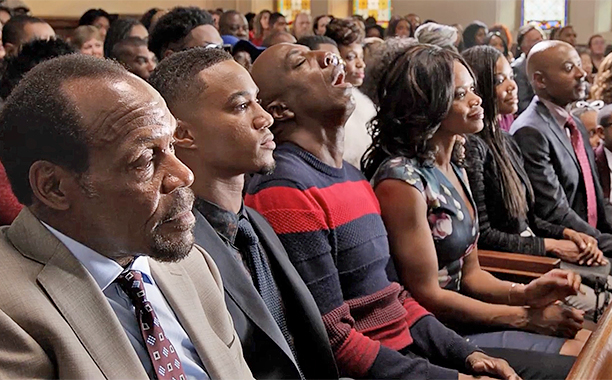 This guy knows what’s up.

Prepare to be sad before you get too happy. The film opens with about 45 years of a relationship between Walter (Danny Glover) and his wife Grace. We get to see them gain a family, raise kids, develop their house, all through many Christmas snapshots and more. And now in 2016, Grace died and Walter is preparing to have his first Christmas without her.

And the whole family is coming over, problems and all. They just have to survive for five days until then while airing many grievances and being sad over the whole dead mom thing.

The youngest son (Jessie T. Usher) is about to graduate from college a big football star and most likely join the NFL. But he is nursing a sports injury that might have gotten him pill addicted.

The next oldest is (Gabrielle Union) a strong independent woman who don’t need no man. Because she divorced him and is a single mother now. In Law school, after dropping out of other big career pathways in her life. Her old neighbor fling (Romany Malco) is also in the town for the Holidays and he just won’t leave her alone.

She is also fighting with her older sister (Kimberly Elise), who is a successful dentist and married to a man (J.B. Smoove) who played some NBA in the day, and is now just a ridiculous man. They have a few kids but their relationship has been a struggle.

And finally we have the oldest son (Omar Epps) who is hoping to be elected a congressman in the House of Reps. Hot damn. This makes him very busy for his wife (Nicole Ari Parker), his kids, but hey, he brought his campaign manager (John Michael Higgins) so he should be plenty festive.

There is plenty more drama I am leaving out, but we also have Mo’Nique playing a successful back up singer and sister-in-law to Walter, Tara Batesole as a grocery store clerk, and D.C. Young Fly as a friend who has the hook up.

And let’s not forget the search for the edible appetizer.

I guess I should first mention my cry count. I think I only cried 2 to 3 times. Maybe just a good 2.5. Hard to remember, but there are of course some touching and sad moments. The whole film is about death and families coming together to work through it all. So of course it jerks a few tears as well.

I surprisingly didn’t fall asleep through the film and surprisingly enjoyed a few of the moments. Most of the better plot involves Gabrielle Union’s character, whom I guess I just had some ability to relate to versus anyone else. The ending got a little hokey, but that too is to be expected in these types of films.

My mind did try and hurt itself early on though. I have been fearing this day my whole life, but Omar Epps and Romany Malco are finally in a movie together. Every time I see Malco, I think Epps. Every time I see Epps, I think Epps. Malco doesn’t really exist to me. Of course their voices are very different, but I suck and get them confused technically. So when Malco first appeared on the screen and flirted with Union, I was uncomfortable, thinking they were playing brother and sister.

Glover and Union carry this movie for me. Epps’ plot line seems forced, Elise’s just wasn’t interesting, and Usher’s felt a bit too life timey. And some of the major plot points remind me of the later seasons of Parenthood, so it just feels like I have seen some of it play out before. And of course the kids, meh, didn’t even tag them. They are hip on technology and slang, to look cute and say outlandish things. Typical.