Let’s take a time machine back six years ago. The world was different, because not everything was in 3D. Only a few films tried out 3D, thanks to Avatar being the cash cow and visually stunning film that it was. This is when people still thought 3D was actually kind of cool if done right.

Then Alice in Wonderland came out, and it made a shit ton of money. Why did everyone rush to see it? Well, I guess Johnny Depp was a bigger deal six years ago, sure. But because it was released in 3D, so everyone went to see it thinking it would be as pretty as Avatar. It wasn’t.

But hey, Disney is on a live action kick. So they figured, let’s do a sequel. Alice Through The Looking Glass. This one will probably no be based on the book either, since it is a sequel to the surprise sequel. So who knows what they will fill it with hoping to be edgy. Let’s just say I am going in assuming the worst here, and that is based on a lot of precedent. 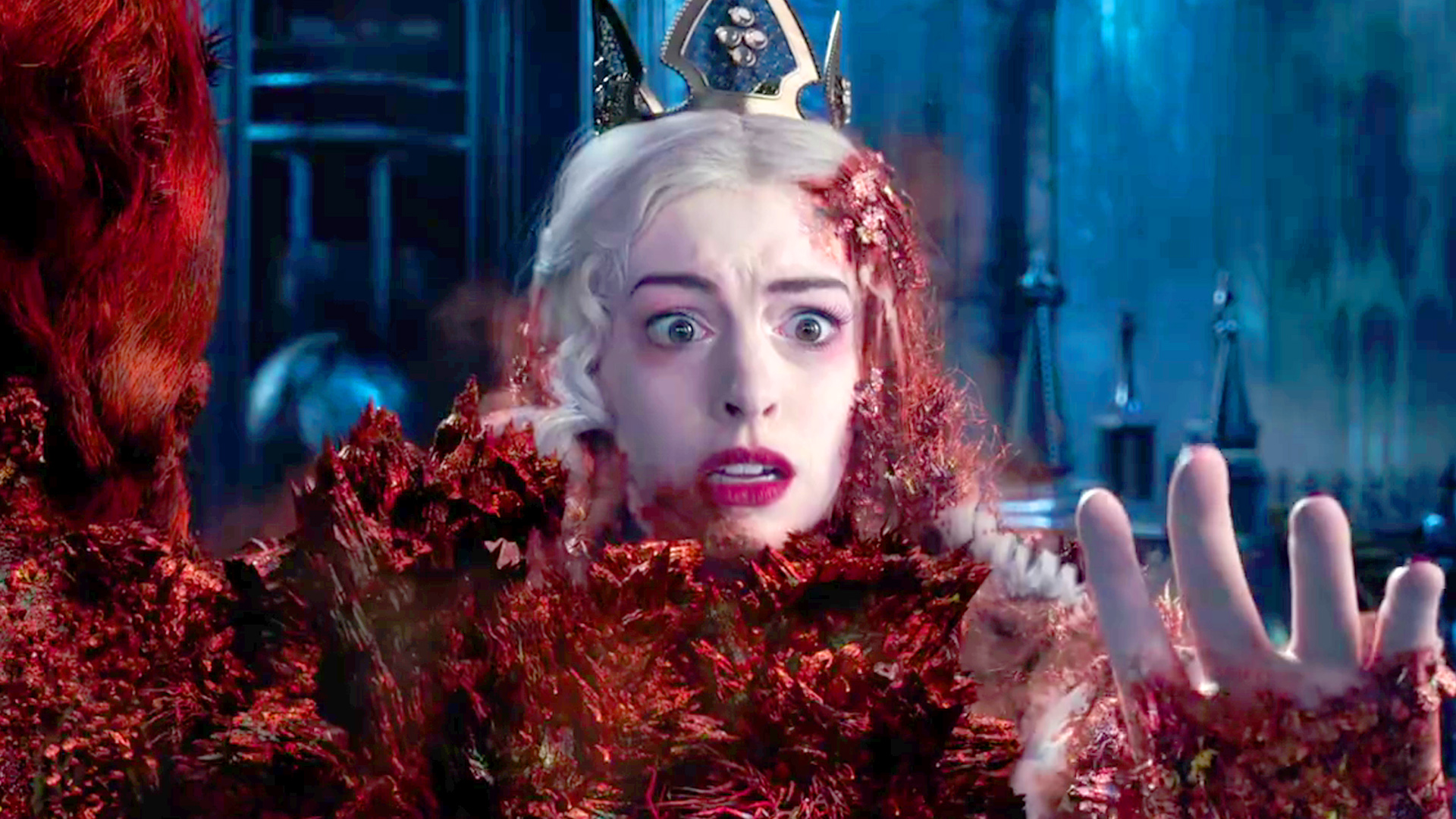 The sequel takes place years after the original, Alice (Mia Wasikowska) is now a free girl, roaming the seas the captain of her own sailing vessel like her dad. She is exploring the new world and making trade agreements! It is actually quite fun. Unfortunately, when she gets back she is in a pickle. Hamish (Leo Bill), the man she turned down now runs the company. Her mom (Lindsay Duncan) has traded away the bill of her house for money, and the only way to get it back is for Alice to give up her boat and take a respectable job for a woman.

So, in the chaos, she runs through a mirror, following Absolem the butterfly (Alan Rickman) and returns to Wonderland! But things have changed. The entire gang is still friends, but the Mad Hatter (Johnny Depp) is now the Sad Hatter. He believes his family, killed by the Jabberwocky a long time ago. It is obvious what Alice must do. If you thought look for his family, you were wrong. No, she clearly should go back in time, save them from the Jabberwocky, and bring them to the present to make him feel better. Yeah. That.

But time is a person (Sacha Baron Cohen). And grabbing the Chronosphere can cause a lot of issues. But she does it anyways, because friendship and sets off on a journey to the past to fuck shit up. 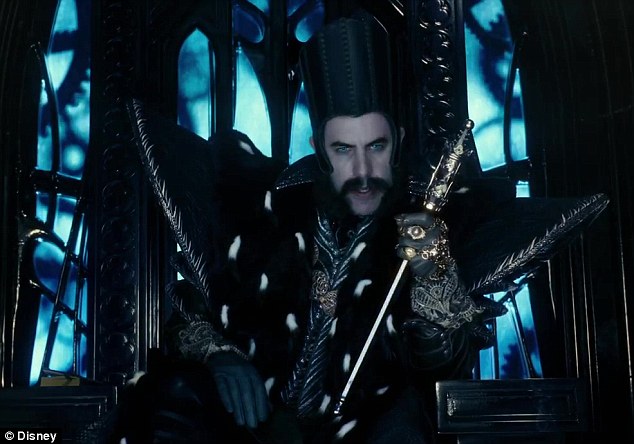 Time is a lot of things, and you will hear every last time pun I do decree!

First of all, Eye in the Sky is Alan Rickman’s real last film. This one is just voice work, and I swear, he maybe had three lines and no close ups. This does not get to count as his final film, I won’t allow it.

As for the actual movie, if you missed it this one deals with TIME TRAVEL. Time Travel is a scary subject matter. It is powerful and can make or break a movie depending on how it is adapted. I am not going to argue one theory of time travel is better than any other, because that doesn’t matter. The only thing that matters is that a film is consistent with their version of time travel. Alice Through The Looking Glass cares not at all, changing the rules on a whim, and makes an incredible hard to follow film without a satisfying reason for making it overly complicated.

This line might be a slight spoiler, because I just want to explain their time travel. Alice finds out that no matter what she does, she can not change the past, the events still occur. That is the time travel they have set up. Until later on in the film, a character is totally able to change the past. Fuck.

Alice goes back in time to three different locations. Why? Because the oceans of time are chaotic and once she learns information, she tries to go to a different time line to change different things. The plot is moved forward by consistently bad decisions from Alice, whom is supposed to be a strong smart female lead. Not only that, because Alice seems to make the same bad decisions, her actions feel repetitive and the films seems to drag when there are easy solutions everywhere.

The ending is an incredible mess. Wonderland is falling apart because of two separate events that somehow produce the same results. But it doesn’t make sense for them to do the same thing. I will try and explain it out without spoilers. 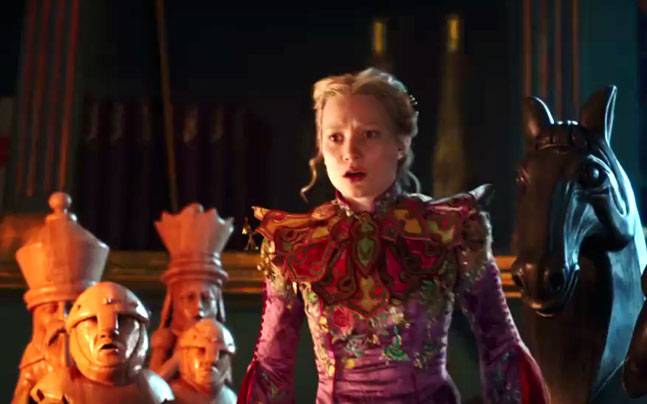 I hope you passed algebra.

For most of the film, Problem A is happening thanks to Alice and the world is slowly falling apart. Much later in the film, Problem B, a completely different problem occurs and actually sets about the end of the world. Problem A is seemingly forgotten about. However, once Problem A is “solved”, thanks to our protagonist remembering it, it somehow undoes all of the damage of Problem B. The issue with that is there is no justification whatsoever that it should work like that. There are no mentions earlier on that if Problem B happens, it can be fixed by X. On top of that, there was no reason for Problem A to even continue late in the film, except for the fact that Alice becomes incompetent.

Finally, Alice is seen as a strong, independent woman, which is mostly true in the real world scenes where she is chased by pirates, but they reduce her to a bumbling fool in Wonderland. All of her positive traits seemingly vanish just to move the plot forward. On its own, I guess it is okay for a character to be stupid, sure.

The real issue here is that her character does stupid things, but she is still being lauded as a smart and capable heroine the entire film. To me, that seems almost more dangerous than just having a weak lead. What we need in films are actual strong female characters, not weak ones that they tell us are strong with us supposed to them at their word.

This is a bad movie and one I cannot believe was green-light by Disney. The 3D is pointless, the visuals are only great in a few places, the acting is so-so. The plot is a mess, breaks its rules (which breaks story telling rules and shouldn’t be seen as a compliment to the Madness of Wonderland), and most of the events happen thanks to stupidity and not for good plot reasons. The only thing I enjoyed was the excessive time puns and Cohen as Time.