Uh oh. This is the second movie I have reviewed with the name Aftershock. The first one, Aftershock, was an amazing Chinese drama film from 2010, over two hours long, on netflix, fantasticles. I could not say enough good things about it.

This one? Well, it was made 2 years later, and is a disaster/horror film, written by Eli Roth. You know, the Bear Jew on Inglourious Basterds. I mean, technically this one is foreign too, kind of. So maybe it will be just as good? 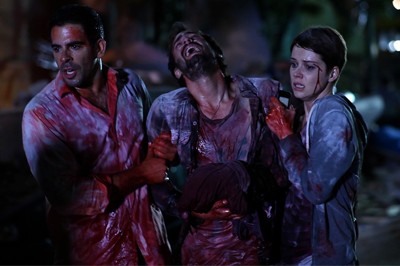 Maybe, just maybe, this one will make me cry?

Apparently Chileans really love to party. That is why Gringo (Eli Roth) is hanging out with his two “Friends”. I actually don’t know why he knows them, but he came down from California to visit and live it up. Maybe even get laid. Ariel (Ariel Levy) and Pollo (Nicolas Martinez) are is guides around town. The only thing I really know about them is that Pollo is disgustingly rich, and has a famous dad, who is also rich yo. So they get all of the hookups.

Later, they are at a literal underground nightclub. Seriously underground, with all of the cool kids. There they meet up with some chicks they talked to earlier, some of which are siblings, models, and friends. Monica (Andrea Osvart), Irina (Natasha Yarovenko) and Kylie (Lorenza Izzo).

They try to split them up for hooking up, but drama blah, OH FUCK BIG ASS EARTHQUAKE. Shit starts falling everywhere, people dying under the rock, and lots of people getting trampled. Ariel is such a good guy, he helps a girl escape from the bar, but loses his hand in the process. His mother fucking hand!

It turns out, getting out of the club into the open isn’t actually too hard. Surviving on top, however. Shit. Looting, turned over buildings, transportation all but gone, no phone service, and the aftershocks which knock down even more shit. Is that a tsunami warning? You bet your ass it is! What is that? The prison in the area had its walls knocked down, so prisoners are running around town, killing and raping things? Shit. That is bad. 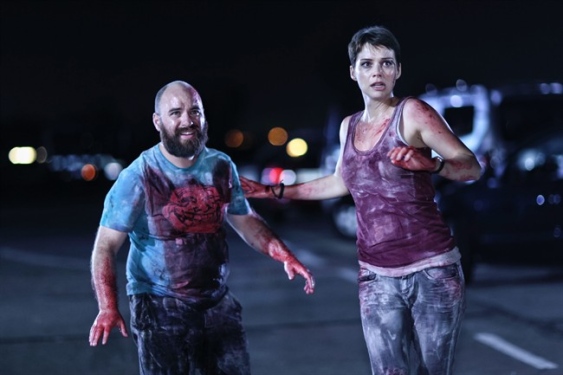 Beard guys is the rich guy. He literally has everything going for him.

What can you say really about a disaster horror movie? Well, the only thing you can really hope for, is that it is entertaining enough, and people die in creative ways.

And boy do they!

So many people die, a variety of ways. Crashing infrastructure, fire, bullets, axe to the back, falling from long distances, and of course drowning and pounding.

I felt dirty writing that sentence.

Needless to say, the acting is kind of shit, and it takes maybe too long for the earthquake to occur, but once it does, it is kind of entertaining. Also pretty gross and graphic I am surprised how far they went. They made tons of allusions at the beginning of the film, and by golly, did they deliver them later.

So it gave me what I can hoped for. I wish the jokes they attempted worked out better. Maybe less subtitles too, but I am just lazy. It was decent for what it was going for, and entertaining just a tad bit. But I do work on earthquakes for my job, so maybe I just find the subject appealing.