I really knew nothing about the plot of A Single Man before i watched it. Only thing I knew is that there was controversy around it, and that there was claims that it deserve the best actor award, not just nomination.

We will see. I will say that Crazy Heart, with Jeff Bridges winning that year, definitely wasn’t my favorite movie, so I can probably agree that someone else should have won without too much effort. 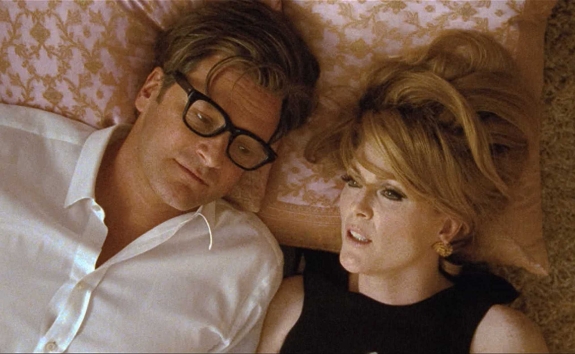 Uh oh, man and woman laying down. Clearly they must have had sex.

George (Colin Firth) is just a man, a single man. Single meaning just one person, but also at this point, he no longer has a lover. But why not? Because traffic is a bitch.

This takes place a month or so after the Cuban Missile Crisis, so it is a much scarier, yet simpler time. He was living with Jim (Matthew Goode) for sixteen years in a suburban neighborhood, who seemed pretty accepting of them as a couple, but they still couldn’t be too open about their relationship. After Jim dies in a car accident, George is pretty distraught. Never really the same, and couldn’t even go to the funeral (Jim’s family would not allow it).

George is a professor of literature at a university, and he doesn’t like the world right now. Fear everywhere, a fear of communism, fear of different types of people, etc. So he has decided he is done with the world, and at the end of the day he will kill himself..

The movie is a day in his life, potentially the last day of his life. With some flashbacks of course. George attempts to handle all of his affairs, and say goodbye to his friends. Including a last dinner with his neighbor, Charley (Julianne Moore) who is a single lady, after a divorce, and also longing for love in the world. There is also a story involving a Hispanic man who lets George borrow a cigarette, and a student of his, Kenny (Nicholas Hoult) who might just be in the same boat as him. 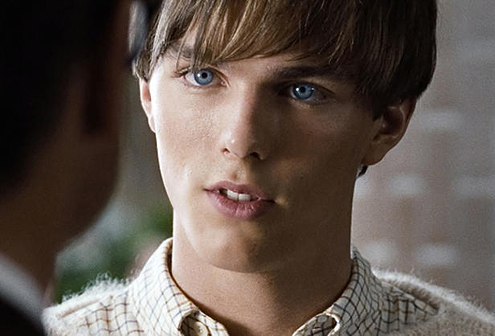 Don’t look into his eyes. Don’t do it.

Wow. Just wow. First off, some of the scenes are a bit weird. The flashbacks, the day, some of the shots are pretty artsy. Slow motion, imagery, etc. But a majority of the time it is straight forward, minus a bit of eye obsession. George during his day tends to stare deeply into peoples eyes, and study them, looking for that bit of compassion.

The acting in this movie is extraordinary. Damn that Colin Firth. Probably part of the reason he won The King’s Speech is from the accumulation of his other roles right before it when he knocked that shit out of the park. This is based off of a book and controversy before hand involved the trailers/posters seemingly “taking the gay out” of the movie. Focusing more on him and Julianne Moore, not him and Jim or Kenny. I am sure that mostly had to do with getting the trailers in theaters, than anything. You know those ratings, they hate gay kissing.

I am not sure if the movie will have the best replay value. Might not be as interested in some of the longer detailed scenes, but the dialogue is so interesting and seemingly important, I could probably listen to it multiple times. Bit weird, but very powerful.