A Pigeon Sat on a Branch Reflecting on Existence was recommended to me months ago. But alas, it was a foreign film, and I put all of them in my “Get To Eventually” folder. And a couple months ago, it was even put on Netflix, making it even easier to watch it, but alas, subtitles.

And now I am finally forcing myself to watch it, not only because I love the title and want to know more, but because it was nominated for a Spirit Award for Best International Film! Didn’t get a pick for the Oscars, but hey, that’s harder.

Anyways. What the fuck pigeons, right?

Horses are notorious for their hatred of pigeons.

I have no idea what to say.

This is a weird movie with a lot of smaller plots. Most of them are pretty much on their own, but occasionally, some of them get connected.

The picture above is pretty sweet though? A lot of strange things going on there. We got a horse, we got uniforms, we got a bar, we have some scared women, and a dude in a mask. Just give it your full attention. It is strange, and it is meant to be strange.

The picture below is less exciting, but it was my favorite scene. Why? Well, the place burst into Norwegian song, and it was a great feeling. I stopped looking at the lyrics just to listen and watch, because song lyrics rarely matter.

If there was any story, it would be about Jonathan (Holger Andersson) and Sam (Nils Westblom), two novelty item salesmen who try to sell some items and wander around and have bad shit happen. 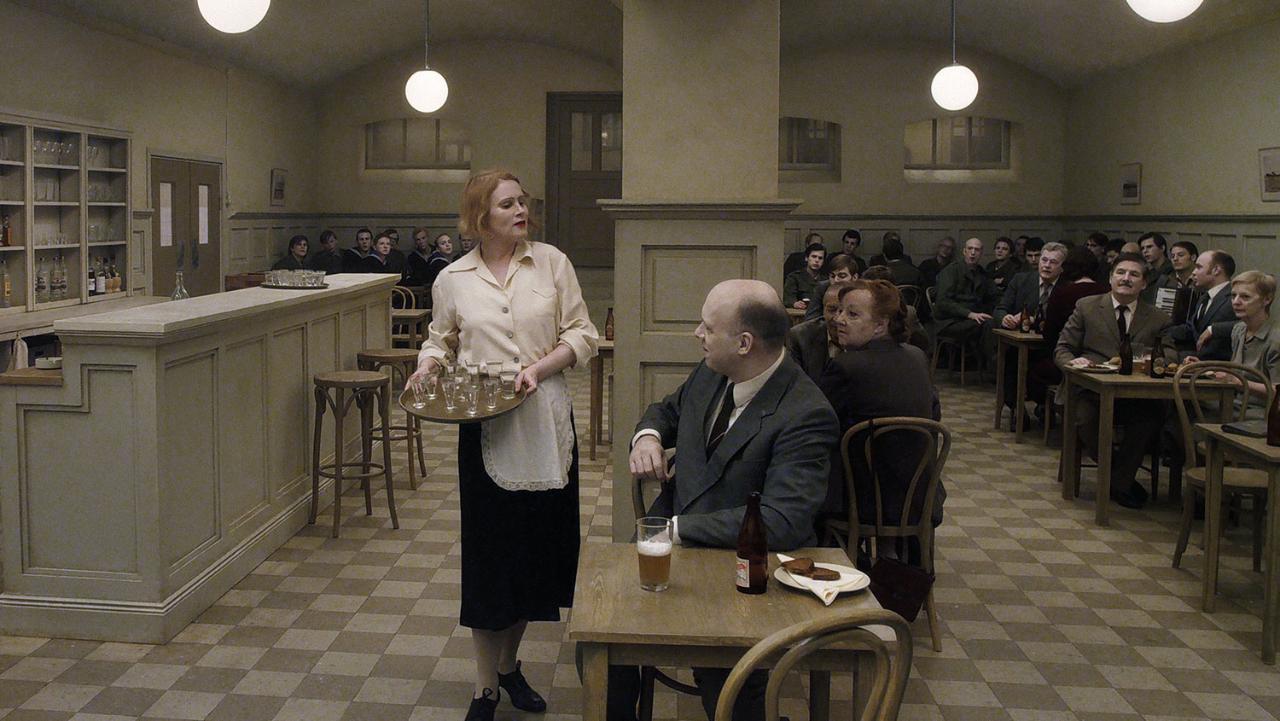 Ever feel like everyone in a restaurant is staring at you?

A Pigeon Sat on a Branch Reflecting on Existence is probably the weirdest movie of 2015. Take that American Ultra. And I mean weirdest by a mile.

It isn’t super absurd, like Rubber, it just has that strange aura throughout each scene. First of all, the camera doesn’t move or follow anyone around. Each of the pictures showcases a scene, and in the entirety of the scene, you will see it from that point of view. That makes the viewer feel disjointed from the action, like an outside observer. Like a…pigeon…staring through the window…or something.

Secondly, the characters are just weird people. The scenes are amusing just because they don’t feel normal. No one is extravagant with their emotions. They are all low key and living their monotone lives.

A very strange film to describe, so much that I have used that word five times already and this review is getting repetitive.

Is it good? Debatable. I would say it is unique and well made and it did what it was going for. Not really anything I’d suggest to most people, nor would I ever watch again. Norway. You crayyy.

2 out of 4.
Tags:2 out of 4, A Pigeon Sat on a Branch Reflecting on Existence, Comedy, Drama, Foreign, Holger Andersson, Nils Westblom, Norwegian