You know what is exciting nowadays? Getting people cleared of all charges from prison when they were innocent. Now, ideally, they would have never been in jail. And they would have been freed way sooner than 20 or so years in jail. Or way sooner than hours before execution. But every false person imprisoned that gets freed is worthy of celebration and a reminder that our justice system blows.

Technically this documentary came out in 2014 before Making a Murderer, but it is still a subject that a lot of people enjoy hearing about. The Innocence Project has been around since 1992, after DNA evidence helped clear a lot of people wrongly accused in the past. And A Murder In The Park is about Anthony Porter, accused of killing two teenagers in a Chicago park at night in 1982.

It wasn’t until the late ’90’s when a journalism class from Northwestern University and their professor decided to examine the case, found some holes, and made their findings public. They found out a witness recanted his testimony because he couldn’t have seen it, they put some more deniability in it, and even got someone else to confess to the crime. A pretty open and shut case. Porter was freed just a few days before sentenced to death.

Because of how close of a call it was, the state of Illinois decided to finally abolish the death penalty. Just imagine if an innocent person was killed by the government. (Psst, it is bound to have happened by now).

However, what if…what if Porter actually did do the killings, and him getting freed put a different, actually innocent person behind bars? That would be crazy, that couldn’t be real life… 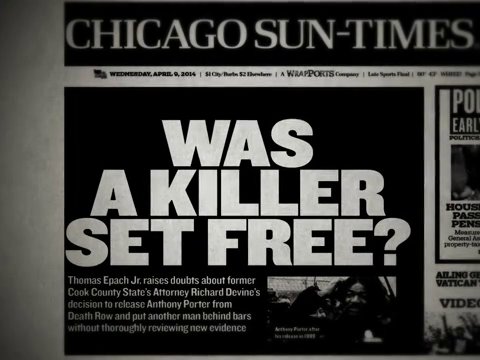 That headline is certainly bold and emotion filling.

It turns out that a few journalism students and a professor with an agenda might not be as good at catching criminals as a police force. One person maybe recanted his testimony, but the police had five other people who saw the crime and agreed it was Porter. The guy they got to convince to the murder did so under duress. A private investigator was called in and he coerced the plea, much like a cop would do at their own building.

So they employed similar tactics that the police did, but this time they put an innocent man in jail to prove a point. Well, if their point was to get rid of the death penalty, they succeeded at that, and did a great thing. But the tactics used were deceitful.

A community could no longer trust their local police force. More lawsuits were held over this, and eventually, the “Real killer” was put free too thanks to all the fucked up shit that was behind the scenes. In the end, the criminal justice system was made helpless as one of their good arrests put doubt into the program and made the crime now completely untouchable due to all the shit that went down.

The documentary highlights an interesting story, but it does feel like a made for TV special. It was on Showtime originally, but the production quality just doesn’t feel like it is there. It presents the facts and tells a story, one that makes you want to question every criminal report you see from now on. And people who argue against it.