47 Ronin ended up being a textbook example of the phrase “production hell”. The “good people” at Universal Studios decided to give the directing chair to Carl Rinsh, who has only ever done some shorts and commercials before this big budgeted movie. It was supposed to be released in December of 2012, but went 50 million over budget, and required massive reshoots.

Why reshoots? Because Universal Studios thought that Keanu Reeves would be the star of the movie. When they found out he was just a side character, they brought in new editors and had to reshoot many scenes to make him a much bigger player. After all, how else could they market this already huge huge budget movie, without a star being the star? How dare the director try and tell the actual ronin story!

Apparently lying about who the stars were wasn’t too important, given that the main poster for the film (Seen here), features a guy with bone tattoos. He is in the movie for about 5 seconds, has one or two lines, isn’t a villain, and isn’t even wearing make up. Yep, those are his real tattoos, you may remember him from the “Born This Way” Lady Gaga music video.

Yep, here are your brave 47. Not the best shape. Some old. But whatareyougonnado?

47 Ronin is actually a true story that takes place in Japan, this version is just heavily influenced by fantasy. You know, to make cooler fight scenes. But the message and plot are still there.

Early in the 18th century, Japan was in a feudal system, run by warlords. One warlord, Lord Kira (Tadanobu Asano) wanted to extend his rule and conquer the land of a neighboring kingdom, but he wanted to do it without being seen as the aggressor.

At the Ako castle, Lord Asano (Min Tanaka, who looks like the Japanese Bill Nighy) had to host Lord Kira and the local Shogun over for a festival. After a few blunders, Asano attempted to kill Kira (with magic influence being the cause) and he was sentenced to death. Kira has a witch (Rinko Kikuchi) working for him! With their lord dead and because Asano’s only heir was a girl, Mika (Ko Shibasaki), the shogun says that she must marry Kira, joining their kingdoms to prevent further bloodshed. Oh yeah, and all of Asano’s samurai get kicked out and lose their jobs.

A year later, the former samurai leader, Ôishi (Hiroyuki Sanada) decides it is time the remaining ronin (term meaning former Samurai) to rise up, and avenge their former lord’s death. There is of course another side story about Kai (Keanu Reeves), a half blood Japanese man, who also might be part demon. Don’t worry, he is totally a good guy too.

Also featuring Jin Akanishi as Ôishi’s son, and Takato Yonemoto as the coolest ronin in the army. 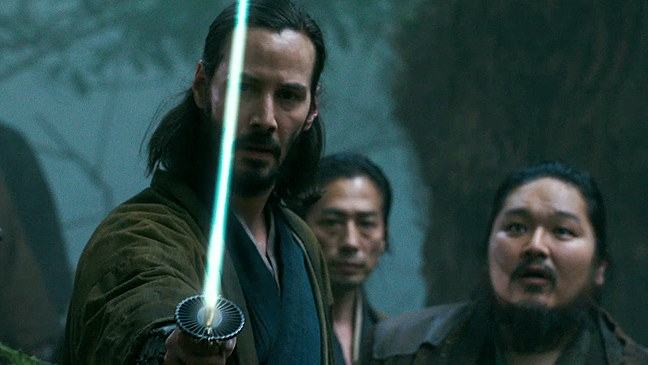 Shit, that guys sword glows. You know it is serious now.

Overall, 47 Ronin can be seen as a nice fantasy based retelling of an actual historical event. From what I can tell, the story is basically right, minus the parts with the demon raised half blood. Not sure where that came from, but I am not an expert on Japanese history.

On the other other hand, while watching, you can definitely tell the problems that went into production. Scenes are edited weirdly, and I was able to notice that although Reeves’ character was involved, he wasn’t 100% involved. Calling him the main character is silly, because Hiroyuki Sananda as Ôishi is clearly the main lead according to the story. Another way to imagine it is that Sanada plays the main lead, and that Reeves is the strongest weapon in his army, so they are both important.

The acting could have been better, and honestly, I would have liked better CGI effects than what was offered. Sure, the dragon fight scene was nifty, but multiple “villains” had similar styles and it just felt like I was getting a few rehashed fights. Unfortunately the movie will most likely bomb, because the story is great. It just needed a lot more polishing.