Let’s talk about History. You know I like history, and studied Ancient History. We’ve been through that many times. I remember seeing the first 300 in theaters and being amazed by what I saw. I was so surprised and excited and at the edge of my seat. Later viewings, the excitement died a bit down, and I didn’t really like the movie as much. That is sad.

So why not a sequel, what, 8 years later? Based on the sequel graphic novel, Xerxes, that isn’t even out yet. 300: Rise of an Empire is also based on history I guess. You see, when the Spartans were forcing Xerxes’ forces to a bottle neck point, the Athenians and other Greece fighters were doing the same sort of strategy but with boats. Overall, both sides stalled enough time to eventually defeat Xerxes’ army!

Spoilers? No, fuck you, that’s history. So let’s get our boat on, and hopefully this movie doesn’t suck. After all, it doesn’t have what I will now call the “Gerard Butler Star Power” aspect that the first one had. 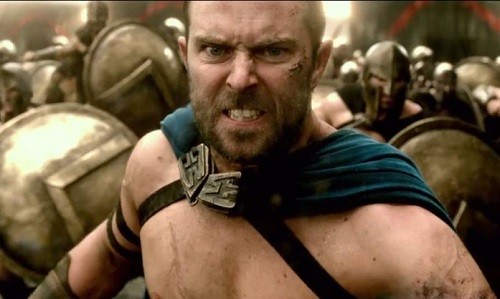 This man is not Gerard Butler.

Themistokles (Sullivan Stapleton) is a great Athenian, bu he wants to be a great Greek. He wants to unite the country, all of the city states (including Sparta) under one banner. He has wanted this for years, and it doesn’t help (or does it?) that Xerxes (Rodrigo Santoro) is at their doorstep.

But Greece doesn’t want to do it. They have democracy now, so he can’t force them. He instead will go out with the small force and try and stall until a martyr can be formed, hopefully uniting the country and helping them win the war. He also has to deal with Artemisia (Eva Green), a Greek traitor who has risen through the ranks in Persia, leading his entire navy and wanting to see Athens burn.

But this isn’t just any sequel to 300. No, we also get material that happens before the invasion. We get the Battle of Marathon, ten years prior! We get to see how lowly Prince Xerxes became Xerxes the GodKing. And of course, we also get to see that after effects to the 300 getting slaughtered.

Lena Headey reprises her role as Queen Gorgo, and Hans Matheson, Callan Mulvey, and Jack O’Connell are the other soldiers who get speaking lines in the Athens boat force. 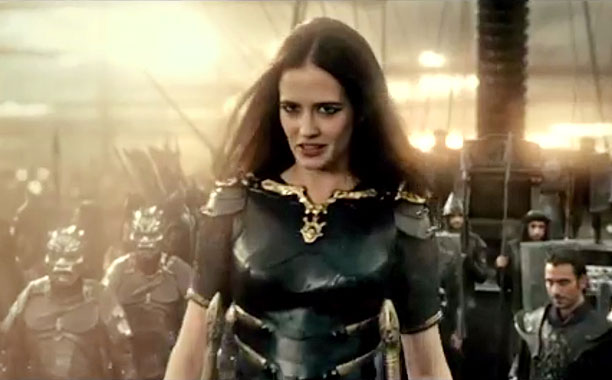 This shit is real too. A Greek woman commanded the Persian fleet. How progressive!

I am conflicted writing this review, just because I know I initially liked 300, and then started to kind of hate it. So, if I initially like this version too, will I hate it in a year?

I liked this one. Shit, thinking back on how much I liked 300, I think this one is actually a superior film. The problem with 300 really is that it got boring to me in later viewings. The beginning takes forever, and the fights feel repetitive once they start. It didn’t have lasting appeal. This movie balances all of that a lot more. We have a fight to begin, then some back story where cool shit happens. Then we have more fights, and then some fights, then some story, then more and more fights. Hell, we also have probably the most ridiculous sex scene I have ever seen in a film.

But I liked it.

That might have sound creepier than I intended. I liked all of the description above, not just the last sentence of the paragraph.

Mr. Not Gerard Butler? He was pretty charismatic. I really wanted to go up and help him unite Greece and defeat the Persians. Sullivan Stapleton, listen to me right now. Do NOT start starring in RomComs after this movie. None of those roles for Butler are good.

The ending could have ended on a more complete note. I am pretty sure they aren’t setting it up for another eventual film, because the last fight is the Battle Of Salamis, which basically ended the invasion into Greece. So, if they had them posing for victory, or Xerxes running, it would have told the whole ending. This part was left a bit too open ended for my sake.

Did I mention all the cool shit that they did? Man, boat battles sure are fun. No wonder why Rome flooded the Colosseum every once in awhile to hold them for audiences.