The word Caged should bring up some very specific imagery, especially with recent events on the border these last couple of years. People in literal caged prisons, crammed together, families separated.

But really, what is the difference between those cages and the prison cages that hundreds of thousands of Americans are already inside of as well? I am not saying that we shouldn’t care about one because the other exists. No, we should care about both and be furious at both. Other countries have prisons wildly different than hours, that actually focus on rehabilitation versus punishment, and social programs to help communities to reduce crime.

But that isn’t relevant to this movie. Which is a horror movie about a guy in solitary confinement losing his touch on reality. 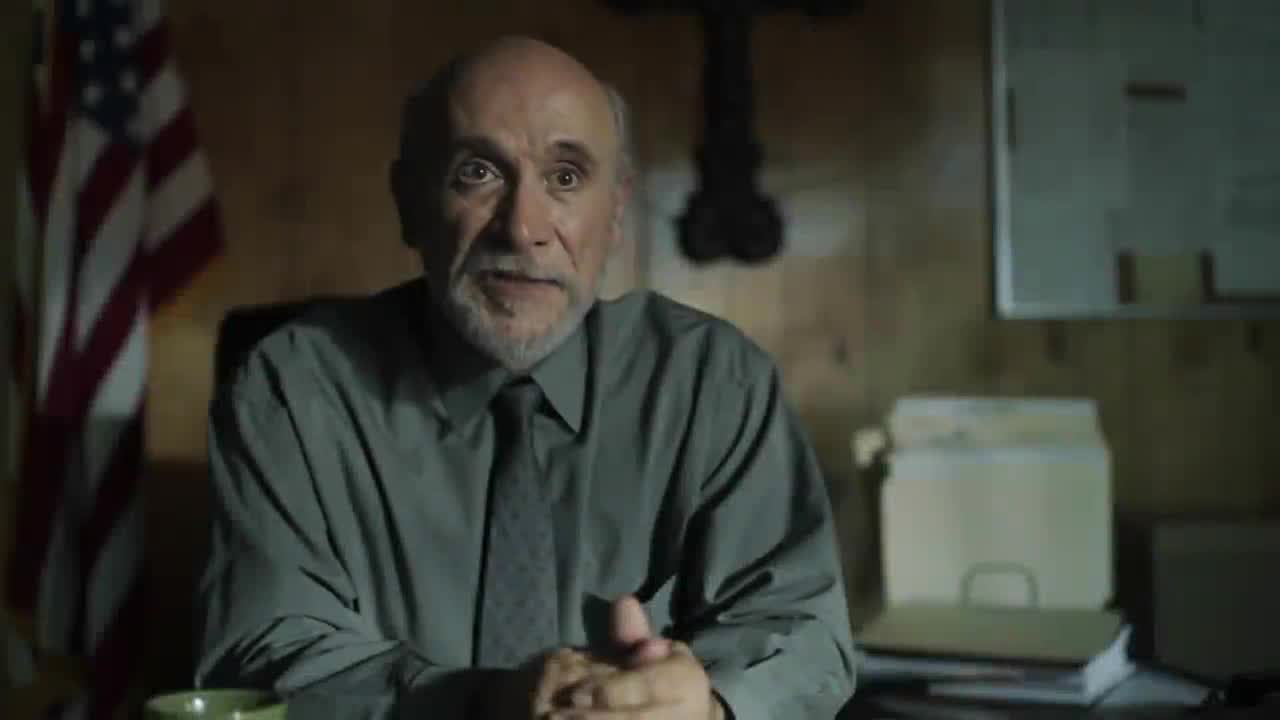 You can tell this is the Warden by the facial hair and the flag.
Dr. Harlow Reid (Edi Gathegi) is imprisoned for killing his wife (Angela Sarafyan). He claims he is innocent. The government doesn’t believe that to be so. And he lost he first case, landing him in the big house, so he is working on his appeal. There might be some evidence that the lawyers did not reveal that helps him out and he thinks he can fight it.

But the start of the film has the law firm representing him, a good friend of his, canceling the appeal because all of his assets were taken. He has to do it on his own, but he is educated, so he can handle it. However, the issue is for whatever reason he was deemed threatening and is put in solitary confinement.

Solitary confinement sucks. One of the guards (Melora Hardin) there seems get pleasure in ignoring him almost. In his misery. Despite listening to everything, it is almost as if he is being further tortured by this lady. Not with waterboarding, but emotional and psychological torture. And when the wall starts to talk to him, that is really when Reid feels it.

We will see their entire relationship played out on one scene on a boat.
Oh check it out. This is my first 0 out of 4 of the year! Congratulations Caged!

Where to begin? Well, on a superficial level, the film clearly has a really low budget. The special effects, when they start inside the cell, are not great. The scenes are extremely limited.

For example, in the flashbacks with his wife? We don’t see any real part of the relationship. We see literally one scene with an awkward argument between the two, that is broken up into tiny tiny tiny tiny tiny components, and sprinkled throughout the film, to give a sense of mystery. But it is disjointed in a way to make it look like it should have bigger time gaps between cuts instead of a few seconds. It should have been one scene, for real, and flashbacks of them doing more to really build and see a reason for the relationship to exist. Or why the suspicions exist. They jump the connection and the flashbacks do nothing for the viewer.

The audio is absolutely one of the reasons I hate it. In order to make the film more jarring for the viewer, to get some of the main character’s angst, we get to hear terrible sounds and screeches too. And sure, I am annoyed now too. And I don’t like it. It isn’t done in a good way. It is done to be annoying and it works.

However, the plot is kind of really shit. I don’t care about the lead, it fails to produce empathy outside of the first scene. If you want to be scared, it also won’t produce any of those feels. Just an uncomfortable movie, that you wish to end to put yourself out of your own misery.