With The Smurfs 2 and 2 Guns releasing on the same day, I thought I would be clever and do a joint review called “Smurf 2 Guns.” Get it? Hilarious! Too bad Entertainment Weekly beat me to the scoop. Sigh. I will beat those guys one of these days, I swear.

Because of that, instead, we get a regular movie review! Hooray! I will jump right on in. 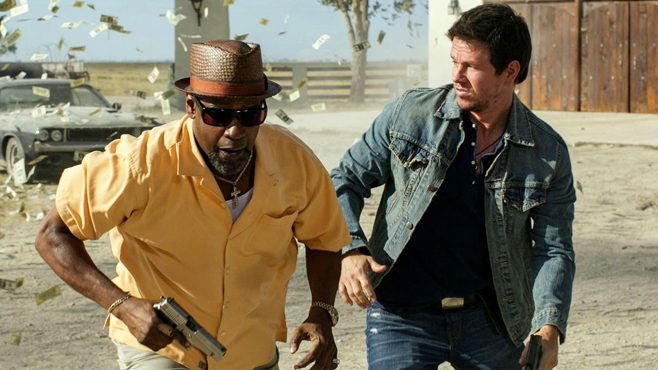 With two stars at their finest, we hope.
Bobby Trench (Denzel Washington) and Michael Stigman (Mark Wahlberg) are about to rob a bank.

Let’s back up. These individuals are working for Mexican Cartel Kingpin, Papi Greco (Edward James Olmos). They just traded him 500 Passports in exchange for $100,000 in Cocaine, but he gave them cash instead. Lame. Now in order to take him down, they will have to rob a bank with his safety deposit box. In that box, there will be $3 million or so in cash that they can use for tax evasion charges, or something. Wait what, take him down?

Let’s back it up again. Bobby is secretly DEA, working undercover to bring Papi Greco in to authorities. He has been working on this case for three years, but his boss is about to pull the plug, and the only one who trusts him is his on again / off again secret lover Deb (Paula Patton), another supervisor.

Stig secretly works for the Naval Criminal Investigative Service. Yes, trust me, that’s a thing. You may be aware of its acronym, NCIS. Why is the Navy doing any sort of investigation into a Mexican Drug Lord, and in Texas? Don’t ask me. Don’t ask Stig either. He is just listening to orders from his superior, Quince (James Marsden).

However, after they rob the bank, they find more than $3 million waiting for them. In fact, there is over $40 million in the small town bank. Damn. Something isn’t right. When they try to reveal their actual identities right after, nothing goes right, and they are left on their own to find out just what the heck is going on. Things take an even bigger turn for the worse when the mysterious Earl (Bill Paxton) shows up in town, questioning just about everyone as to where HIS money ended up. 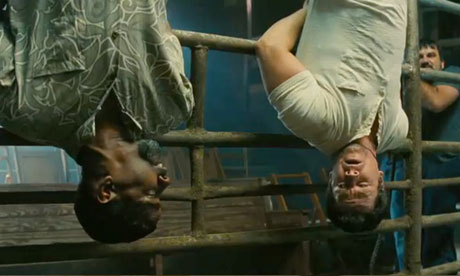 2 guns. 2 guys. 2 ropes. If you get what I am sayin’.
2 Guns is billed mostly as an action comedy, a genre made very apparent from the trailer. A lot of nice one liners and wise cracks. Good show. While the action element is certainly there, the comedy element is incredibly light and sporadic in the actual movie. Wahlberg’s character makes a few jokes early on, but they quickly seem to disappear once all the betrayal starts. Heck, I found Paxton’s character to be the most humorous, but that was only because he was mysterious and a cowboy.

Speaking of characters, the secondary cast members weren’t used very well. Paxton (as I just described) was at least a bit interesting. The fact that James Marsden is in this movie almost feels like an oversight, with no real reasons for a big star to be in that roll. They also reduced the CIA to mere money hungry meanieheads, without any real explanation at all. In fact, the NCIS, DEA, and entire US government is seen as corrupt and inept, for no real reason at all.

In terms of plot, it is all over the place. They tried (very little) to explain why Stig was even investigating Papi in the first place, but it didn’t make any sense. The actual scene itself was quick too, just in case you wanted to understand the plot.

So half of the movie I am confused, trying to figure out how any of it makes sense. When they did finally explain why it didn’t make any sense, their actual reasons feel unacceptable.

Not a spoiler, but someone was pulling the strings secretly behind all of it, and set them up to rob a larger amount of money than they expected. Surprise surprise. But given how long these men have been working their posts, there is really no way anyone could have orchestrated any of the events that would lead them to rob a bank, without other people finding out.

The factual details are also out of whack. I could only shake my head during the “break into the navy base” scene. It felt comical, in the bad way, how little they cared about accuracy with it.