High-Rise is another movie based on a famous book that I have never heard about before. Shit, this book came out in the 1970’s. It took forty years before a movie was made about it, despite having general praise. And it wasn’t even done by America, but the UK got involved to make this bad boy.

And that is all I knew going into it, outside of the setting. That being a single apartment tower.

That might be all I need to know too. Single apartment tower films have tended to be good lately. The Raid: Redemption and Dredd. If it is anywhere close to their level of quality, we got a trifecta here. (I’m ignoring Everly, but that is a guilty pleasure film of mine).

I named this picture “Hiddledick” and felt very proud of that fact.

High-Rise takes place in a sleek and modern UK. In fact, it takes place in a new apartment tower that has all the commodities. There is a school, a supermarket, a pool and a gym, a spa. On the top levels, there are nice apartments and on the bottom, well, they are more modest and common I guess.

And the film begins with Dr. Robert Laing (Tom Hiddleston) walking around in this tower, all decrepit, falling apart, full of dead bodies. Just a sneak peak. The film then goes back three months to when we moves in and life is perfect.

The tower is designed by Anthony Royal (Jeremy Irons), a great architect and meant to be the future. Laing moved there after the death of his sister, starts a relationship with a single mom (Sienna Miller) and becomes an almost father to her son (Louis Suc). Laing also befriends a low level guy with a lot of energy (Luke Evans) and his pregnant wife (Elisabeth Moss), despite the class difference.

Eventually, when residents find out that the police seem to be avoiding the tower, then changes start to occur. And you know. Laing all alone with a lot of dead bodies. 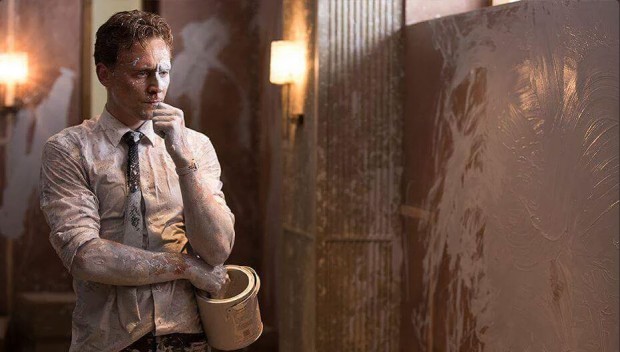 No, no, no, this shade is just all wrong.

What the hell did I just watch? I really had a hard time grasping it. I read the very detailed wikipedia outline after the fact, and it cleared up some issues, but it didn’t answer a lot of things. Was the book this vague and…weird? Probably weird at least. I just didn’t get it at all. This whole thing was probably a metaphor for something, but the film is so hard to follow that I can’t really figure it out.

Honestly, if they could have just answered the why things fell the way they did, I would have been a happy camper. But the film leaves to much up to the viewers imagination.

The film itself is shot wonderfully though. The camera use was well done and the music did a great job of guiding my feelings. The acting seemed fine for the most part, in particular I was driven towards Evans’ character the most.

High-Rise is chaotic yet slow, and a film that might require a reading of the book.