The Gallows has a decent trailer. I say that in that it doesn’t give the whole movie away. They only show literally one scene of a girl crying under the red light of an exit sign. And then of course she dies by the bad guy of the movie. That is it. We aren’t seen every scary moment in the trailer, we are shown just enough to tease us into watching it.

Despite how the movie goes, I am stoked that the trailer wasn’t terrible, in a time and age where it feels like everything cool and somewhat spoilery is shown because they assume the average movie goer wants to see it.

The Gallows trailer showed me so little that the movie looked like it could be scary and something I could enjoy, all in about a minute! Hooray advertising!

Unless of course the trailer is actually the final scene. If they do what The Apparition or (even worse) Quarantine did, I will be quite upset with the whole thing. 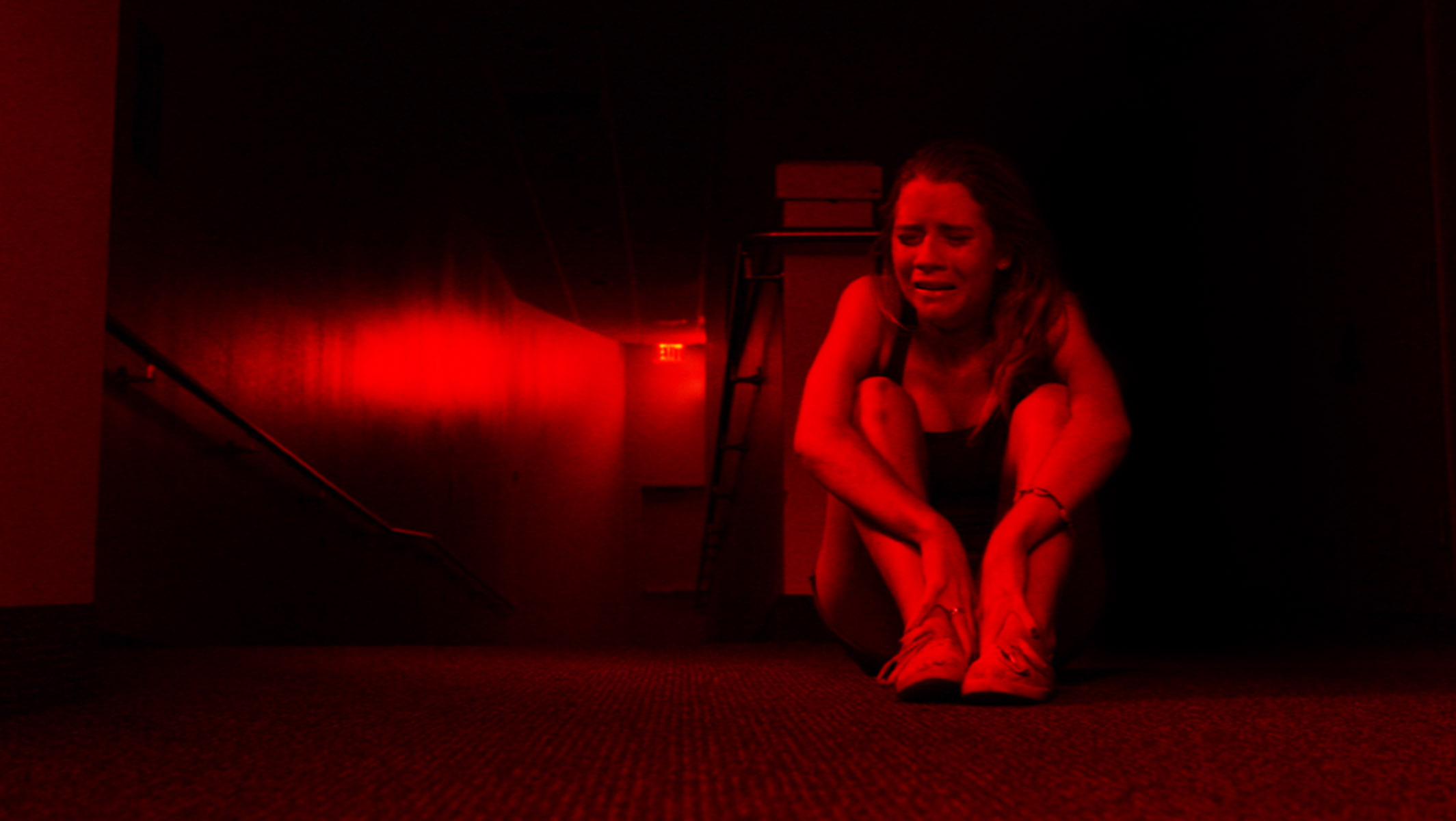 Fun Fact: This is the elusive actress who was in God’s Not Dead that I couldn’t find the name of last year.

Twenty years ago, disaster struck Beatrice High School. They were putting on an original play called The Gallows, and everything was period specific and ye olde well done. Except for the ending. When Charlie was actually hung from the gallows, breaking his neck and killing him instantly. That wasn’t part of the script.

But now it is modern times! And to honor the tragedy, the drama club has decided to fucking put the play on again. They had to fight the school board and PTA, but damn it, it is happening, no matter how terrible the play looks. Also apparently at this school, the play is done by a real drama class, which a lot of kids are forced to take for elective reasons. They don’t have to act, they could be backstage or tech crew people! Like Ryan (Ryan Shoos), who thinks the whole thing is a big joke and is recording things so we can get a movie. Ryan and Reese (Reese Mishler) are football players, although Reese quit the team to star in the play awkwardly enough. He is starring along side Pfeifer (Pfeifer Brown), a drama geek who actually likes acting but no one likes her. (EXCEPT FOR REESE THAT IS. OH SNAP).

Also Cassidy (Cassidy Gifford) is involved, because she is Ryan’s girlfriend.

Long story short, Reese is a terrible actor. He can’t remember a lot of his lines and has no delivery. But he likes Pfeifer. So Ryan convinces them to sneak into the auditorium before opening night to trash the set. Ryan could then comfort Pfeifer and both of them be upset over the no play thing. But Pfeifer catches them at the theater because she saw his car! And then…and then…the doors all lock. No way out of the school for some reason. Ohhhh boy. This is creepy. Especially if there is some ghost spirit Charlie thing running around haunting shit and trying to kill these kids.

Or maybe it is not a ghost. Maybe it is someone super mad about something. Like the stage boy/manager (Price T. Morgan). Or the drama teacher (Travis Cluff). Or that old lady who went to the school 20 years ago and watches each rehearsal (Melissa Bratton). Or Reese’s dad (Theo Burkhardt). Or David the Janitor (David Herrera), because he works at night and stuff. 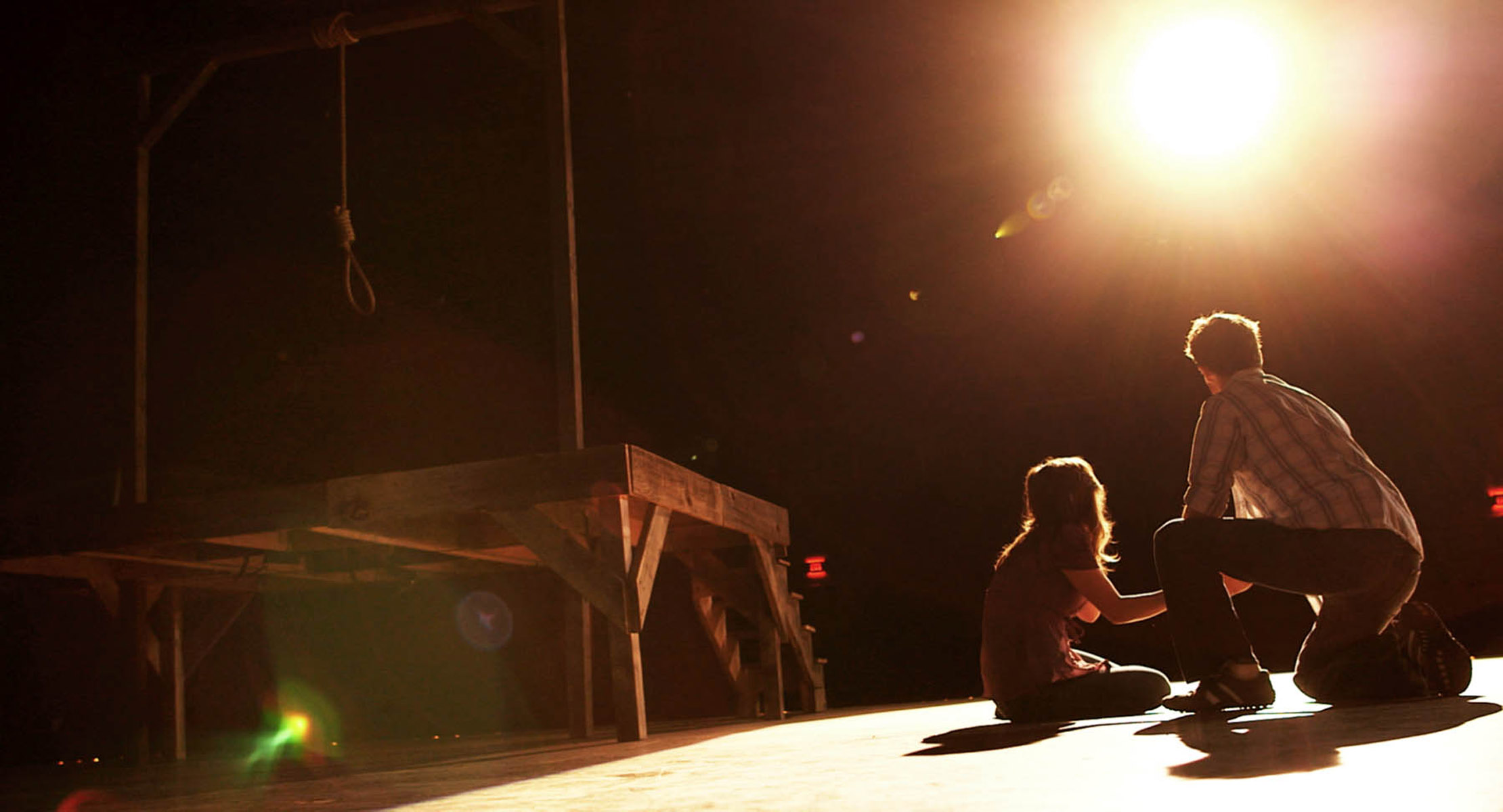 And lets not forget about the butler or the lighting guy!

The Gallows clocks in at barely 80 minutes, not counting the credits, so it is another of those short horror films like Unfriended. The good news about these short horrors is that if they suck, you aren’t wasting too much time to see if the payout is worth it. The entire film felt like it was teetering on that edge between waste of time and kind of awesome, making it a more frustrating experience.

A lot of people hate the “found footage” genre of horror film, because a lot of films end up doing it badly. Unfortunately, this is a badly done version of the format. After they get into the high school, the only reason anyone uses a camera is for the light features, and apparently they only work (whether phone or real camera) if it is on and recording. This causes them to needlessly lose power and other bad situations when it became plot convenient. [Technically unrelated, but a bad feature of the genre: Our screening went fuzzy about 15 minutes in and it took 15 minutes for the theater to notice, because given the format, the lack of focus could have technically been a feature!]

The acting isn’t that great, which is fair since these are all just scared teenagers mostly. The film did scare me a few times, but almost the entire film is jump scares, which is a bit disappointing.

The best thing going for the movie is actually its plot. Yeah, I know. The film wraps everything up nicely by the end, with a few twists and turns to show that they had an actual point to their film and not just an easy to make horror. I loved the ending, just thought the rest could have been a bit better on the scare department.