Ruining child classics is one of Hollywood’s favorite past times.

But this is not one of those examples. Because Hollywood is not behind this movie, just some low budget independent company. That’s right. The Boxcar Children, a book made in the 1920s and repopularized in the 1940s, it then spawned 159 follow up books and specials. WHAT. More impressively, they are are still making more. Four of them came out this year and a few are scheduled for 2015 already.

Of course, that series after the first book decided to go completely boring and make it a strange good-natured mystery series.

But hey, I read The Boxcar Children in like, second grade. In fact, it is the first legit book I have read. It had zero pictures, something called chapters and I didn’t read like 8 of them in one reading session.

So bring on the kids who do good things and live in the woods. 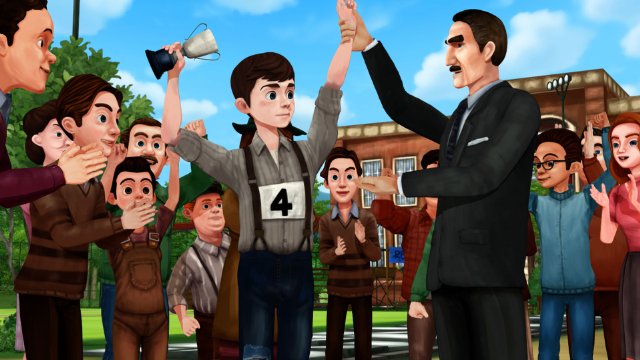 And who are as happy at winning as that one spelling bee kid.

Four kids. All brothers and sisters. And no parents. Wandering around, sleeping in bakeries, paying for bread with money they presumably earned by helping old ladies cross the street.

We got Henry (Zachary Gordon) 14 and technically the leader because he is oldest. Next is Jessie (Joey King), 12 year old girl, who is the mom figure and thus the cook. She runs things when Henry is out earning change for a living. After that is Violet (Mackenzie Foy) who I have nothing of note to say outside of the color purple and she is kind of weak and useless. But not as weak and useless as Benny (Jadon Sand) who is six and has no redeeming qualities outside of being cared for by others.

They are wandering around because their mom died or something and they don’t want to go to their mean old grandparents home. So they literally ran away, walking from town to town, being runaways with a 6 year old kid.

They are afraid of getting put in orphanages so they run into the woods afraid of some baker couple. And hey look, a box car from a train on an abandoned track for some reason. K. So they live there. 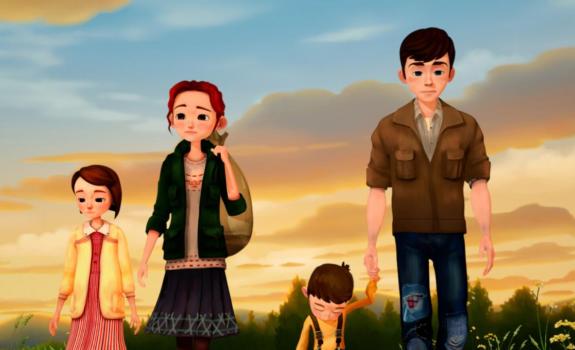 They literally have to drag that kid along it looks like.

And now, my analysis where I talk mostly about how creepy the movie looks.

Man, this animated film is super creepy. Not like, uncanny valley creepy, like it is so close to human just a slight step away. No, it is just creepy because the animation is really really bad. Like, worse than video game bad. Like worse than Hoodwinked Too!. Like beyond terrible. Like before PSX graphics bad. I just don’t get it. The Snow Queen was an independent movie from like Russia and they had better animation than this one.

Watching characters eat or grab things, but having that object floating next to their hand and not holding it. And the animation was especially bad with water. And unfortunately they seem to awkwardly interact with it throughout the movie.

The story itself? Well, it follows the book pretty darn closely. That is good for your purists. But it also turns out that the book doesn’t have a whole lot going on for it. It is a pretty boring story. But if you liked and remembered the books, then you might enjoy this not completely shit animated film version of it. But I am disappointed in that a nice live action version is something I might enjoy more. Then it won’t feel so damn creepy.