I definitively had Repo Men on the shelf for over a year before finally watching it. Why? Because I thought the plot would be obvious. I thought it would be lame action.

I also knew that the Repo! The Genetic Opera had also existed, even though I hadn’t seen it yet. Just didn’t like two movies having similar dystopian futures, despite their (now knowing) very different plots.

But hey. Lets not judge it before we watch it. That’d be horrible. 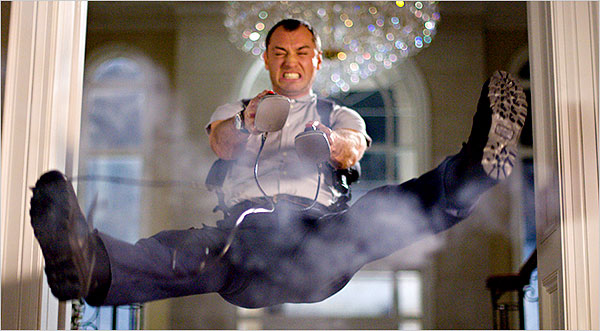 But the action does look quite shocking.

Jude Law is a repo man! Not really too scary, but he does you know, go collect organs from people who are behind on their payments by a certain time. He is required to ask them if they want an ambulance, but normally doe when they are knocked out. Not that it matters. If they are losing their heart, an ambulance wont really be able to help. His wife, Carice van Houten, wants him to stop (because its kind of mean) and move to sales. Yes, switch to giving the organs (and bad contracts) versus taking them. Pay is worse, but at least hours are stable.

Either way, on his supposed last extract before he was going to switch, a crazy explosion happened and left him badly hurt. So something happens, can you guess? You can totally guess. He gets a new heart from the company. Yet has the same exact guidelines as a normal person, thanks to Liev Schreiber, his boss. This pisses him off, and thinks it is a death sentence. His partner, Forest Whitaker, tries to get him back on the job and collecting, but Jude can’t will himself to kill others anymore.

Knowing his time is up soon, Jude finds himself in a colony of people hiding out with organs. He meets John Leguizamo, who i a surgeon himself, but only takes away the organs from other people. He also meets Alice Braga, a girl who has been on the run forever, and has dozens of expired organs. Once his time is up, needless to say none of his former workmates want to go after him, but in the end it has to be Forest.

What then occurs is their attempts at both escape from the country and clearing their organs from their record book, so they can escape to a foreign beach and live carefree for the rest of their days. 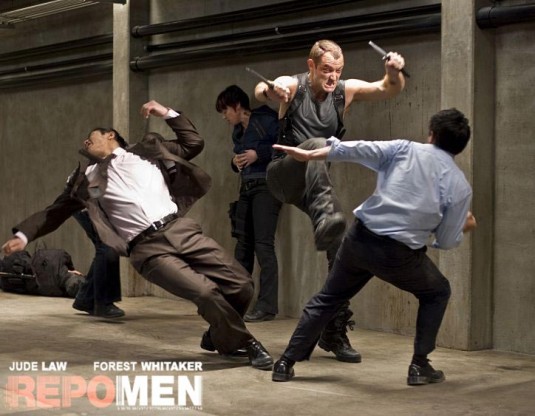 Not to mention some intense ass-kickery.

Despite the kind of obvious turn of events, I was still thinking it was a pretty decent movie. But the last twenty or so minutes? That shit was amazing. The action was intense, the drama was intense. The ending? I was definitely surprised by it, and made the movie much better. It answered all of my questions, and was not at all what I was expecting.

Well done ending. Pretty sure its worthy enough to be the only reason to watch it.