When I first saw the trailer for I, Frankenstein. I sighed.

I like Aaron Eckhart, technically. Or at least, I liked Thank You For Smoking. My favorite part of The Dark Knight was Two-Face.

Maybe it is that I only like him when there is a competent director? Yeah, that’s it. Listen, Nick, don’t go to a movie because of Aaron Eckhart being it it. Just let the Aaron Eckhart-ness happen.

Kind of like letting the erect statue just happen.

So in this story, Victor Frankenstein was obviously a person, and he totally created a man out of dead body parts. He fucking created life. He was scared of it though, so he sent the monster away from the house in rage.

The monster (Aaron Eckhart), in anger, came back, killed Victor’s woman, and got him to chase him into the cold arctic depths, that his puny human body could not take. Silly Victor. While burying his former master’s body, for giggles, he is attacked by a group of demons! Oh no! Some bigger demon, Naberius (Bill Nighy) wants him! He totally takes out a few with his dead man strength, before some Angels show up to take the rest. Angels? No, Gargoyles! Okay!

They represent the Order of the Gargoyles, which wage war on the demons for God. Hmm. Their leader is Leonore (Miranda Otto), with her champion Gideon (Jai Courtney) and they don’t really trust him. He is a slight against God, the only person thought to be able to create life.

Which is why Neberius wants him. He is a man without a soul, which means a demon can take over his body, and he can use science to bring back all of his dead demon buds who died to the Gargoyles, and try to get his world take on. The monster doesn’t give a fuck. He wants to live on his own for 200 years instead, until he is tired of being hunted and wants to fight back.

200 years later? That is modern time! Now Neberius just wants to make this shit on his own, without the monsters help. He has hired scientists to try and recreate the experiment, and the best person for the job is apparently Yvonne Strahovski! Whoa! 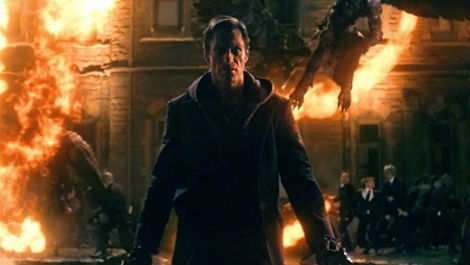 This picture is bad symbolism, because it has none.

I, Frankenstein decided it wanted to go full on “January Movie”. Like, to the extremes. I am so happy that I know what is coming out in February, and basically every week has something that looks pretty good. Some weeks multiple movies! But I can’t wait for this month to be over.

Before you get too crazy, The Legend Of Hercules was probably still a worse movie. So it isn’t that level of bad.

This movie has very very little to do with Frankenstein and his monster. Sure, the main character is identified as the monster, but it only took the “stitched together and made from dead parts” trait, and nothing else from his story line. Have you seen the trailer? Fire effects everywhere, and we learn that is actual fire that the demons turn into when they descend (when they get killed, they get sent back down to Hell). Frankenstein’s monster is known for four things:

Fuck this movie. The action was boring. The soundtrack was maybe the only decent part. Except it never really changed, it was always the same ominous sounding music. The final fight had a cool element to it, but the way they saved the day really didn’t make a lot of sense.