The oil industry is a fickle little bitch. I know quite a few people who are currently jobless as a result of a price crash and international disputes. But this documentary, The Overnighters, isn’t about the oil crash despite how easily it could have been. It was about the oil boon.

The only reason people would volunteer to move to North Dakota is for work. There are thousands of thousands of oil workers doing manual labor, working 12 hour shifts, non stop, oil rigging, hard work fun. And they make money. They get OT every week and have no free time, but they get paid and if they can keep it up, they can get rich quick.

Some people go out there because no jobs at home, some because they want to get away, some to support family back home, and some because they have no other alternatives. They might have had felonies or other law trouble and getting a regular job just isn’t going to work. So they hear about all the jobs up in North Dakota and just drive up there and think they will get lucky.

But a lot of people cannot find work right away. Not only that, but in all of these small towns, there are not many places to stay. Sure there are some apartments, but thanks to the boom and supply/demand, the rent is extremely high. Places like Williston, ND aren’t going to build a lot of apartment complexes, because they know it will eventually come crashing back down, then they will have virtual ghost towns.

So we have people living in cars, living in RVs, and an increasingly annoyed small town that is afraid of them for being strangers. For being people with potentially violent pasts.

But one man, Pastor Jay Reinke, opened up his church to some of these people to sleep on their floors. And the parking lot to others. Just so they could stay overnight somewhere warm as it is the Christian thing to do. 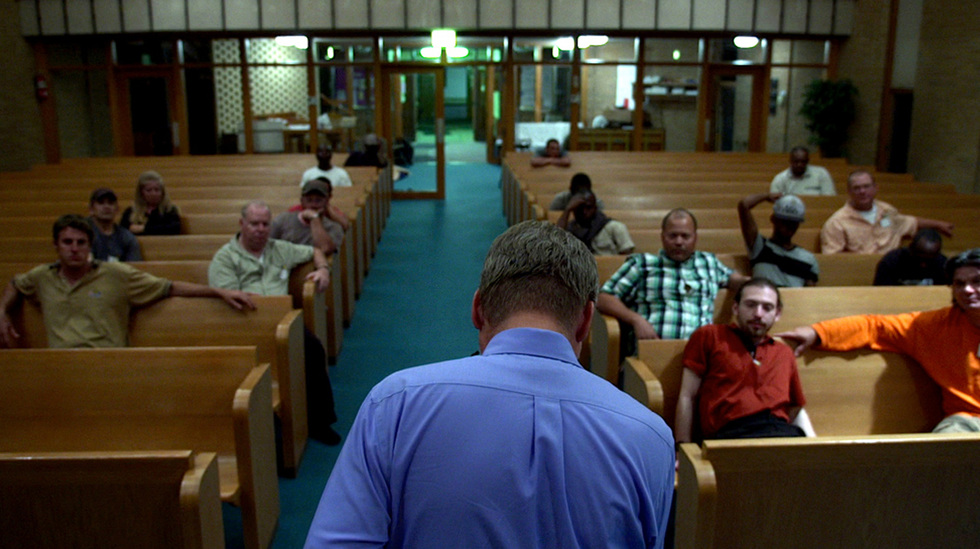 See, now you understand the title!

Pastor Reinke seems to be a genuinely good guy. He wants to help others when everyone else turns their back. He helps them find jobs, let them know about other places that can help out, and gives them advice on whether they should even try to stay and tough it out.

During the documentary, there is also a local ordinance wanting to ban people from living in RVs. If they find someone is staying in it for more than 28 days in a year, they can be fined or arrested. This will seriously ruin a lot of lives of people who are just trying to survive and get by, not hurting anyone. So Reinke even goes door to door with flyers, inviting the towns people to meet these men and get over their fears. To see that people can be helpful and more Christ-like. Hell, Reinke even opens up his home occasionally to a few people.

But Reinke has his own demons from his past that also affect his family (wife and two daughters), more so than anyone would realize. Just typing that sentence made this sound like a thriller, so forget that.

The Overnighters is a powerful documentary. You get to hear stories of many individuals, including Reinke himself. He seems to be a guy who wants to help, but still he ends up making enemies. It is a reminder that life can fucking suck, and makes one wonder how much worse it is up there given the oil crash.

And it affected me emotionally as well. It was easy to imagine myself in the position of some of those individuals, willing to do anything just to support the family. It is a harrowing documentary that might make you feel like shit.

So why not a 4? Well, I have some issues with the way they presented some information at the end. And also the questions that they didn’t answer in the documentary by the end. They seemed to focus more on the pastor and less on the men who were homeless and potentially about to be spotless as well, when it comes to a place to sleep. But it still didn’t take away from the power that most of the documentary had on someone watching for the first time. Those stories are the real power here. Sure, the pastor has his own unique journey, but I just care less about that.

3 out of 4.
Tags:3 out of 4, Documentary, Jay Reinke, Oil Boom, The Overnighters