Some people think Jim Carrey is just a slapstick comedian way past his prime. But those who defend him always note that he doesn’t only do silly and zany movies. The two people talk about the most are The Majestic and Eternal Sunshine of the Spotless Mind, and to a lesser extent The Truman Show. (I am not saying The Truman Show is bad, just that it is still kind of silly. I love it!). But if they want to go a darker path, they will bring up The Number 23, the only “horror”-esque movie he has done. Horror is a very strong term, it is clearly just an eerie thriller.

But after hearing people bring it up, I knew it was my duty to watch it. One day (yesterday). Is it worthy of the praise of the other two films.

Let’s face it, you’d rather watch the movie over read the book right?

Walter Sparrow (Jim Carrey) is a pretty normal guy. Has a wife (Virginia Madsen) and kid (Logan Lerman). He is an animal control officer, basically the coolest job ever (outside of putting down animals sometimes. And the fact that it sucks).

Yep. His life is good. His wife finds the book The Number 23 in the book store, likes it herself, and gives it to her husband as a gift. Which is when things start to get weird for him.

He notices similarities between the main characters childhood and his own. Neighbors were described the name, his mother died the same time as another character in the story. His wife thinks he is reaching of course, because he is nothing like the main character, Detective Fingerling. (Heh). He doesn’t play the sax, doesn’t solve crime, and isn’t a detective. But once they introduce the number 23, and how a character in it becomes obsessed with the number, finding it everywhere in their lives, he too start to find it everywhere in his life. He even begins to dream of killing his wife, scaring him so much he gets a hotel to finish the novel and figure out why it is so dang similar.

Too bad the novel ends at chapter 22, with the detective about to take his own life. What a shame. Maybe the novel is a confession and he just has to figure out who the murderer actually is, not some silly pseudonym? 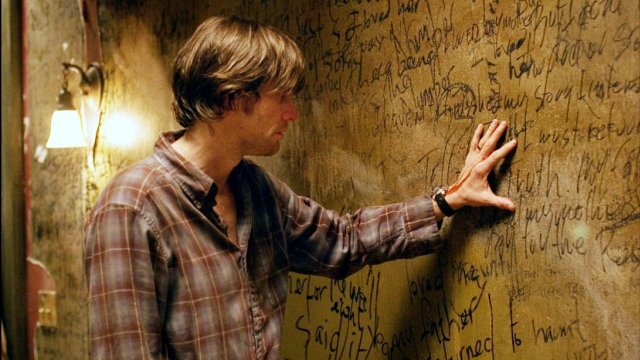 Who ruins a good wall like that? Bunch of savages in this town.

Well, for those people who point to this film to prove that Jim can be a great actor, I suggest they stop. They are doing a disservice to Jim. After all, he CAN be a great actor. Hell, even Mr. Popper’s Penguins wasn’t complete horseshit thanks to Jim. He has gotten older, and he is kicking ass when he wants to, but The Number 23 is not his best work.

Jim gets to play both Walter and his visions of the Detective in the movie, believing he truly is the star of the book despite the differences. The book is in a dark noir style, but skips around a lot, and basically involves him go crazy, while Walter goes crazy in real life (and drags his son into it). But the number 23 thing, the main plot of the film and title, is really the most important thing. I bet if I looked it up, I would find a lot of factual errors in terms of the facts they gave and what equaled 23. I heard a few in their quick ramblings that just werent true, which is annoying. Did they fact check their facts? (Or is to show that the characters were reaching for more 23s and making up things? How meta).

Either way, it is a strange movie that didn’t improve my life in any way. The only trivia question I can see in it is “What number does Jim Carrey become obsessed with in film?” Ah. 23. Done.