Fucking finally. Resident Evil: The Final Chapter. It has final in the name, so there will be no more without a reboot, those are the rules. Ignore whatever happened between Saw: The Final Chapter and Jigsaw, those guys are liars, they totally won’t be liars here.

If you read my long milestone review on Resident Evil franchise, there is a common problem with the films. Each film would end with a cliff hanger and a goal! Okay, fine. But the next film will either ignore the cliff hanger and have it resolve off screen and ignore the “goal” set by the previous film. It was especially egregious in films 4 and 5, where they decided to go a completely different route, creating their own excuses that were shit for changing the plot. It was fucking stupid. Although sure, the second film continued after the first where you would expect it to, so that is the only one that really felt connected.

Anyways, if that happens again, I might flip my shit. Also another reminder, one stuntman died during filming of a scene, and a stuntwoman had a shit ton of injuries, 2 week coma, and had her arm amputated off. Holy fuck, that is bad. That is not a good start to a movie, especially a movie no one asked for. 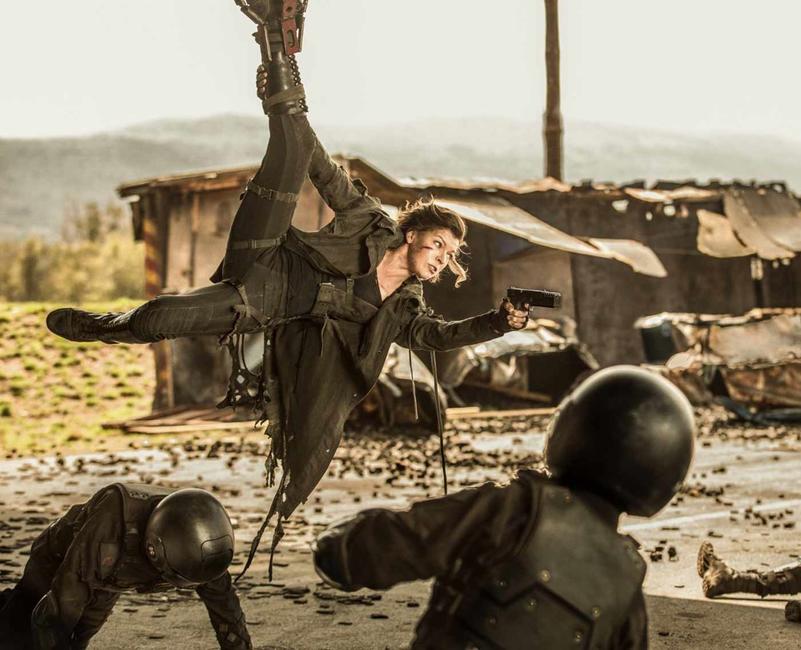 But that’s okay, because at least Milla was able to dangle on her own.

At the end of the last film, Alice (Milla Jovovich) and crew had to head to Washington, DC, ready to take on giant waves of zombies at the White House. Wesker (Shawn Roberts) sent them there and was a good guy now, after being a bad guy.

Well this film begins with a backstory, which is different than backstory from previous films, and then jumps over the other films to bring us to now. Which is actually in DC! But some time has passed. Alice is now alone again, for reasons. Also apparently Wesker turned on her and the crew and is a bad guy, again. Seriously, all off screen pre-movie, they were like, lets make him bad again and do none of this DC plot, and let’s put it in a new direction, again. Fuckers.

So after some fighting with a goddamn zombie dragon creature, Alice gets contacted by the Red Queen (Ever Anderson, real life daughter of Jovovich and Paul W.S. Anderson) and gets an earfull. Apparently the Umbrella Corporation developed an antidote before this whole outbreak thing occurred. They wanted the world to fall to ruin, yes like a Biblical flood, then they would release the antidote into the air, killing anything with the T-Virus inside of them

The Red Queen wants Alice to get to the cure before the last human settlements are wiped out. She has about two days. And of course, the cure is at the bottom of The Hive facility underneath the now wiped out Raccoon City, where there are going to be some zombies, and fucked up shit inside. Hooray! 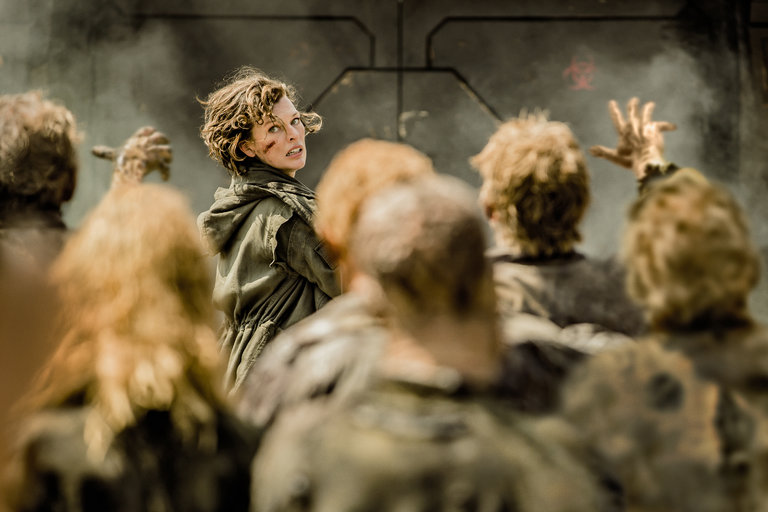 At some point in the franchise, the zombies just become Alice’s biggest fans and always follow her around town.

Resident Evil: The Final Chapter is a bad movie on almost every front.

First of all, it continues a story only in name, because it literally once again, tells a different story than the previous film implied. Characters have different motivations suddenly. Characters who were at the end of the last film are now gone and not mentioned. The entire backstory is changed at the beginning, just so they can do different things with this film. Yet at the same time, this is just another film where the goal is to go into an underground bunker, do a thing, then escape the bunker. A nice giant open world long fight, implied by the end of the last movie, would have been great.

There is technically action in this film, but good luck figuring it out. Even scenes of very little important are cut so rapidly I found myself barely watching the movie. It was hurting my head and eyes. It is one of those ways to cover up good action scenes by having quick cuts and to hide stunt actors. No good amount of choreography, just cut cut cut with flashing lights and confusion.

Acting is weak. The plot is extremely weak, with twists you can definitely see coming. There is nothing profound about this film, even with Biblical elements. You will just find yourself waiting for it to be over.

HOWEVER. Guess what! It is never over. It. Is. Never. Over. This movie ends on a cliffhanger. The story isn’t over. This is probably not going to be a final chapter. Meaningful conclusions are bullshit. Sure, the story seems like they finally finished the Umbrella Arc. But you know as well as I do that if there is another movie within a decade that there will be Clones or something of the important people, another hidden sect, and a story that just won’t die.