These are the words I imagine to be in Shakespeare plays. A lot of crazy language that is hard for a simpleton like me to understand. Thankfully all of their plots are explained in modern English online, so you can read up ahead and just nod along during the movie/play and pretend that it all makes sense.

At least for Macbeth, it happens to be probably his third most famous story after Romeo and Juliet and Hamlet, so that is good. Macbeth is known for its play and film curses, which are silly. I actually saw an old TV movie of Macbeth before. Came out in 1979 and a much younger Ian McKellen played the starring role.

What that means is that this is the SECOND time that Michael Fassbender has played a role that McKellen played first. First it was Magneto, and now Macbeth. Hmmm. I Wonder what else Fassbender will try to steal? 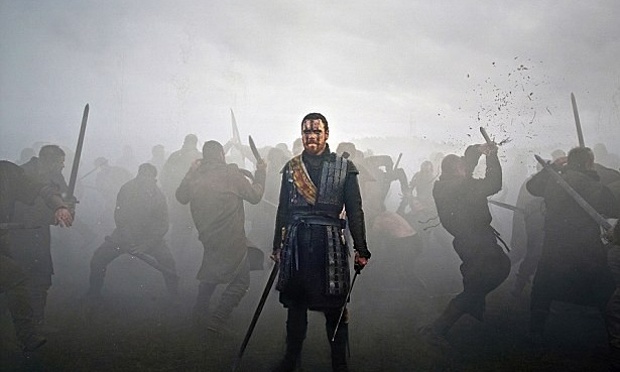 This film sponsored by: Monster. Unleash the beast!

Trouble dost follow our poor Macbeth (Michael Fassbender), one of the Thanes of the great King Duncan (David Thewlis). The King had a few traitors, trying to take over, causing a few wars. Not so good, thankfully people like Macbeth, all weary and haggard, still battled some battles and saved the day.

After the last battle, Macbeth is visited by a few witches (Kayla Fallon, Lynn Kennedy, Seylan Baxter), who speak cryptically. They call him a title that is not his own, and then call him King! And for his warrior companion, Banquo (Paddy Considine), they say he will have a better life and that his sons will be Kings.

Sweet deal for both of them, unless Macbeth cares about future children. Next thing Macbeth knows, the King is staying in his grovel of a village and has given him a new Thane ranking! Like the witches said! Macbeth tells his wife, who of course only goes by Lady Macbeth (Marion Cotillard) about the premonition, and she is like “Fuck that, let’s kill him and get this show on the road!” And then you know. Things start to happen.

It wouldn’t be a Shake spear drama without some murder and some guilt and ghosts. You know, like Hamlet! 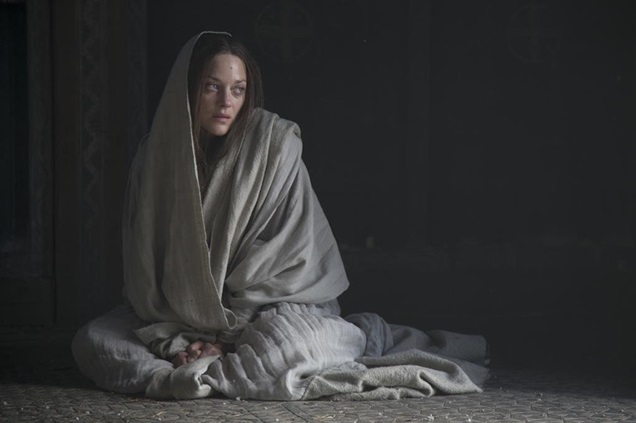 “With all these Mac-daddies running around, why do I also have to take the Mac crown? ” – Lady Macbeth

Macbeth is bound to be one of the prettiest and more stylized movies of the year. The costumes were great and everything felt age appropriate. I never considered Macbeth living in basically wooden shacks before he got to go to the castle, but it makes since given the era. Everything was put up to 11 when it comes to the cinematography. The fights weren’t just people yelling and swinging swords at each other (although we did get that). We got slow motion, colored backgrounds, monologues from internal thought. A lot of the monologues were overlain with scenes of the characters wandering around and doing shit. Vocal montages, if you will.

I know my great use of descriptors like “doing shit” will really draw you in, but every shot being a portrait clearly was their goal.

Unfortunately the film suffers in another aspect. Understand-ability. Most obvious would be the dialects from a few of our actors. Very northern Scottish stuff, could be a struggle at times. Second comes from the fact that it is already Shakespeare dialogue, which is known to us silly Americans for its confusion. Thirdly, I have to imagine that at least half of the play is omitted from this film.

Most annoyingly, it doesn’t begin with the “Double, double toil and trouble” witch thing. What even is the point? But outside of that, there is a lot of crazy shit going on and they don’t even try to help explain things. Neither the missing dialogue/conversations nor the actual dialogue. The prophecy from the witches was whispered and easy to miss completely.

I think if you don’t know what Macbeth is about from previous source material or from looking up the plot summary, you will be lost throughout this film. A film needs to make sense so that the viewer can understand the story. I hate having to know the book to understand the film, as they should stand on their own. Don’t care how famous the tale might be.

Well acted? Fuck yes. Cotillard and Fassbender are outstanding. Even more props to Harris, who had a smaller role but knocked it out of the park. It makes me angry that he was also the shitty Geologist from Prometheus.

But a very confusing rendition of the story, despite the beauty behind.