Definitely another movie I bought just because of who is on the cover.

Henry Poole Is Here sounds pretty much like a meaningless title to me. I guess this Henry Poole character is some sort of new neighbor, who moves into a suburban neighborhood and parties it up, causing his neighbors ire. Maybe.

By the end maybe he will learn to not be an asshole. Maybe.

Well I was wrong. Shit is a drama, and it is serious at that. I was dead on with the asshole commentary though.

Predicting movies is hard. I rarely turn out to be right if I have never heard of it before.

Maybe calling Henry Poole (Luke Wilson) an asshole is bad. Mostly because he is going to die. Alright, we all are, but he has a terminal illness. He decides to wait out the rest of his days by moving back to his old hometown, and getting a small house in a suburban neighborhood, where he can waste away his days with pizza and liquor. Pretty much retirement. And waiting to die.

His neighbor, an old hispanic woman (Adriana Barraza) sees a face on his outer wall in his backyard, from mold or something and claim it to be a face of Jesus. She even tries to get the priest (George Lopez!?) to make it a holy site, but he doesn’t seem any proof of it. Not until that shit starts having blood appear. And maybe healing people?

One neighbor Dawn (Radha Mitchell) separated from her husband, and for about a year her daughter has not spoke. But after seeing the face she has begun to speak. A miracle! No…not really. But another girl, Patience (Rachel Seiferth), an annoying cashier at the market, can see when she visits and touches the wall. She had thick glasses before. Another ehhh moment.

But eventually all of this builds up into anger. More and more people are visiting it and bothering him at his house. He meets someone he likes, but he is going to die soon. So he destroys the wall with a sledgehammer.

Then some other things happen.

Oh hey, Cheryl Hines is also in this movie as a Realtor. 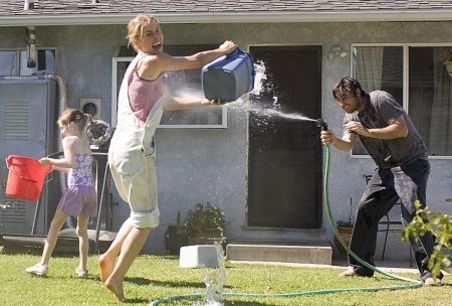 When you are going to die soon, you take every opportunity to spray neighbors with a hose.

But then I hated the ending.

This is a movie that is kind of about religion and Christianity, but also about believing in believing. Despite the large faith issues associated with it, I was very into the movie for most of it. The drama was slow at times, but I thought appropriately paced for this guys point of view.

But the ending? It killed me. The last few minutes. Just seems to go against his character completely, and felt like a cop out for the directors. Everything fell into place too neatly, and I just didn’t care anymore.

A bad ending can ruin pretty much everything. But I thought the acting was pretty well done in the movie. Definitely a lot different than I expected. And once I found out it was religious (very early on) I am surprised it kept me as interested as it did.