I know what you, the readers, are thinking. Friends With Benefits? But we just had No Strings Attached? Why Hollywood, Why? 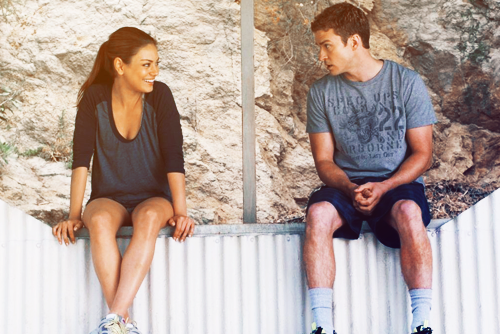 This was supposed to be clever, showing them inside the Hollywood “O”. But it is too zoomed it.
MY BAD GUYS.

This tells the tale of Justin Timberlake and Mila Kunis. Despite normally against it, lets keep comparing it to NSA. Timberlake > Kutcher. Fact. Most people would say Portman > Kunis though, so I will go with that. Mila’s eyes scare me.

JT is a web designer and gets offered head art designer job at GQ Magazine in NYC (way different than LA!) by Kunis, who is a head hunter. They become great friends, which is great, because he doesn’t know anyone in NYC. They agree to be friends because he’d be lonely despite it. They both also have obvious relationship issues, stemming from their parents. But eventually, they say fuck it. Literally.

Just like Tennis, its just a physical thing, so they decide to have sex without baggage and emotions. Yay America!

The rest of this you can guess, eventually they do have feelings, but are afraid to admit them. We also get to explore both families, Mila’s promiscuous mom and JT’s divorced dad with Alzheimers. Also, flash mobs, cheesy movies, and Woody Harrelson as a fantastic gay man.

Twice they show clips from a fake “rom-com” movie, that stars Jason Segel and Rashida Jones, which is also pretty damn good. 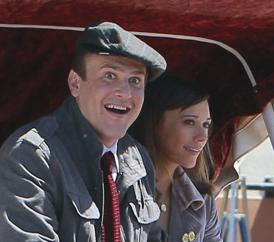 A movie within a movie. You know that is serious business.

This movie was pretty damn funny though. Both did great in their roles, and now we know why Timberlake continues to be in movies. Because he is a decent actor. Damn weird phenomenon right there. You also get a nice rap. For those who watch Modern Family you will be able to see Luke in an important movie role for once.

3 out of 4.
Tags:3 out of 4, Comedy, Friends With Benefits, Justin Timberlake, Mila Kunis, Woody Harrelson