Dream House? I never saw a preview for this movie. Just new it was “thriller/horror” based, had james bond, and the poster involved two girls wearing outfits that looked like wall paper.

Alright. Sounds like nothing new, but lets see what happens! 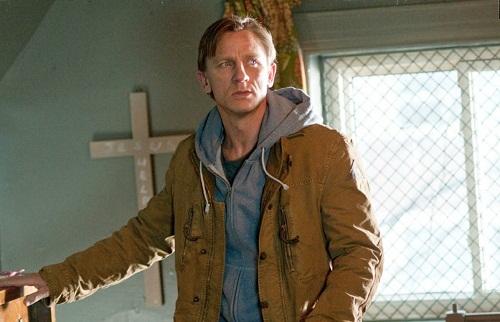 Daniel Craig is a writer, but he is done with that shit! He wants to move with his wife (Rachel Weisz) and two kids to a non city area, and write! Oh yeah, he isn’t done with writing, just wants to help raise his family better. Suburbs are good for that. Write novels at home and stuff.

Well, his daughters start to see things. A man in a window? And there is someone they sometimes see outside? Turns out five years prior, a MURDER happened in their house. The wife and kids were killed by the dad who was taken to a mental institution. After further research, he was released not too long ago! He tries to get more information out his neighbors, Naomi Watts and her husband Marton Csokas, but they seem uneasy, and unwilling to help.

At this point have you figured the whole movie out yet?

Well yeah that is true. But then there is more. After all “Dream House”. The things that happen in the house, how much of it is real, and how much of it is fake? Thankfully every question is answered in the movie. Whether or not you accept the answers as good enough is the bigger question.

There goes the wallpaper clothes. Is that supposed to be scary? Just seems like they’re poor.

The movie is only about 90 minutes and can easily be broken up into about three parts. The first part is the boring set up, possible weird stuff going on, without anything actually being scary. Second part is the investigation and realization. Third part is the confusion of what is real, what is fake, and the wondering of why any of it matters. The ending of the movie is a complete mess. Confusion is what they were going for, but even when you should know what is going on, you will be confused because of poor design.

So what am I left with? A thriller that isn’t thrilling, and a lame conclusion / obvious plot line (that they try really hard to muck up). Blah.