Potentially the most hated director in the world. More hated than Michael Bay.

He is known for two things. Making shitty movies hated by most people (like BloodRayne), and a few years ago saying he is willing to box any critic who says his movies suck. Well jeez. Although it gained him internet points, I won’t let something like that get in the way of saying whether or not a movie sucks.

So why did I watch this new movie, Assault On Wall Street, that went straight to video? Because that’s the whole fucking point of my website, damn it. 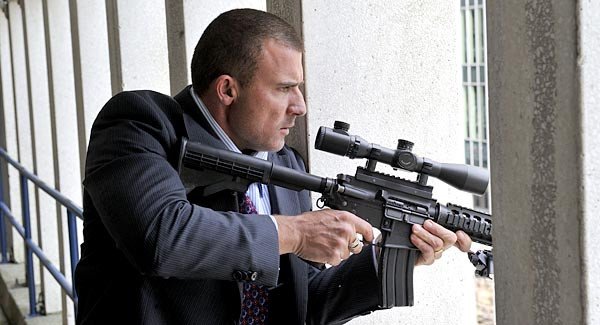 I make the pew pew pew joke too many times. But it is important here. To the plot. Pew pew.

Jim Baxford (Dominic Purcell) is your everyday normal guy. He works as a security guard for an armored truck company. You know, he works for a living, isn’t a Wall Street fat cat.

Speaking of Wall Street, the economic collapse thing happens. He loses a big investment he made with his stock dude, Robert (Lochlyn Munro). Why? Because the corporation saved their own asses, not their customers/investors. He tries to start a suit, but his lawyer fucks him over too, and does things without his permission.

Also his wife has cancer (Erin Karpluk). Or something, I forgot. Probably cancer. That is taking up a lot of their funds, because his small town job doesn’t give the best insurance. So they start going into debt. Credit scores go higher. In fact. This shit leads to him losing his job. He can’t have a job protecting money if he himself is bad with money.

Basically, shit is raining down on Jim. One thing after the other. One even bigger thing happens, that I won’t spoil, but it basically breaks him completely. He can’t stand it. He takes his severance package and spends it on guns. He practices. It is time to strike back. It is time to take out his own personal form of vengeance against these bankers. One at a time, and hopefully end up at Jeremy Stancroft (John Heard), the CEO that hurt him the most. 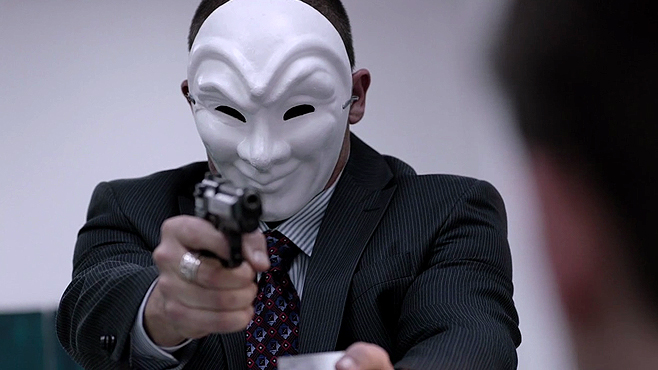 There comes a time when good man must wear mask.

Uwe Boll really did shit on Dominic Purcell’s character in this movie. That is the entire first half of the movie, which is less than 100 minutes anyways. Bad things happening, and him slowly breaking. Which is good, we needed a lot to happen to him for him to break. Although it was still a bit boring at times, and somewhat overly dramatic.

The killing spree in the second half was also a bit slow. To start. A quick snipe or two and hide. But it built up until he became a newspaper phenomenom, until he finally stormed in on an office, taking out a whole floor and more.

Sure, it could be considered mindless violence, but the actual ending confrontation between him and Jeremy Stancraft was pretty great. Some monologue-ing, and a twist I didn’t see coming.

If it wasn’t for the slower aspects, I would have rated this higher, because that ending was awesome.