This review for A Quiet Place has come way later than most of you would expect. But hey, I missed the first screening. And for a movie of this level, I would normally rush off to see it regardless. But I also love my wife.

And this is a movie she wanted to see badly as well. Her wanting to see movies isn’t rare, but she almost never wants to see horror. Her love of the actors involve and the interviews she saw online changed her opinion enough to still want to see it, so I knew my first time seeing it would be with her in our house, once it is on Red Box.

Which was like, a month ago. Vacations yo, they can delay things. And thus even surprising me for when this one finally came out.

1
This is how my students have to walk down the hallway sometimes if they don’t listen to the rules.

We first see our family with the world already ravaged. People are gone and dead. Things have been abandoned. Desolation, ruin, all of the normal signs of an Apocalypse.

Our father (John Krasinski), mother (Emily Blunt), and three kids (Millicent Simmonds, Noah Jupe, Cade Woodward) are looking for supplies and no one is speaking. Every time a sound is about to be made, it is stopped and fixed before problems occur.

Based on newspaper articles and television recordings it is clear that some sort of Alien has occupied the planet. They have amazing hearing but poor site. For those who choose to run, play, gossip, they will be quickly found and eaten. A pretty shitty time to be alive.

But this family is doing okay. They have sound proofed most of their belongings. They knew sign language because their oldest, the daughter, is deaf. And the father is spending a lot of time trying to get her an earpiece to let her hear the world.

Needless to say, conflict will be coming to their house. An event, an incredibly loud one normally, is to occur, and they have to find a way to survive the attack that will certainly appear at their door step. 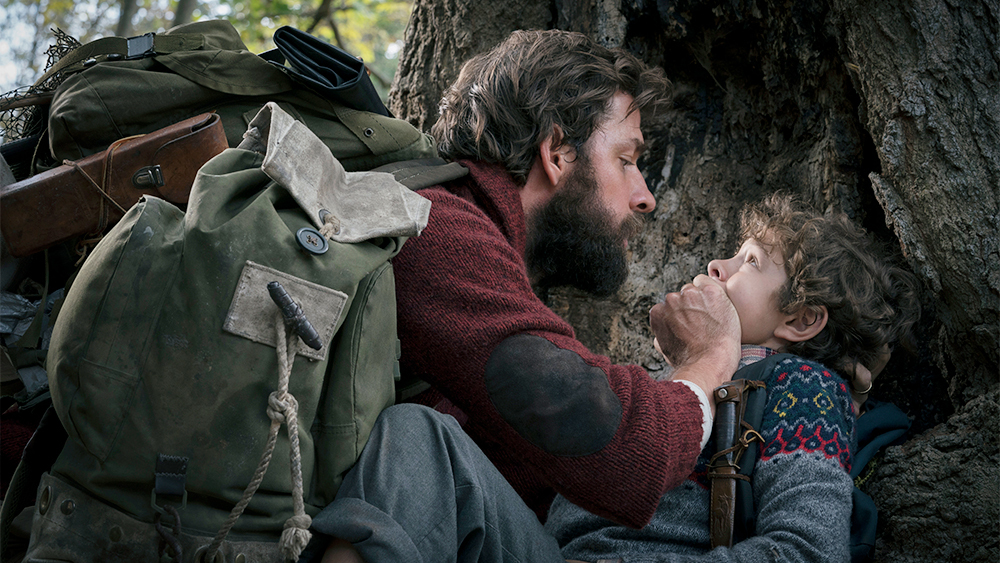 WE SAID NO TALKING GOD DAMN IT!

What a tense and wonderful film. Directed, starting, and written a little bit by Krasinski, he shows off a powerful movie on his first full feature attempt. Well, first well known movie. Not many people saw The Hollars, despite some nominations [I totally wanted to, I just forgot]. It is at least his first horror picture directing.

A lot of experiences with this film will talk about how amazing it was to quiet an entire theater from any sound, as a joint experience brought on from the films suspense. That didn’t happen in my house, because it is a house with kids, but I still was on the edge of my seat.

A Quiet Place did a great job of explaining the alien back story without feeling stupid. And better yet, we get to stay in the dark like most of the cast about the aliens. We don’t get all of it explained and we don’t need it. The idea of future sequels worries me as they will likely ruin the suspense.

Overall this is a very tense and upsetting movie. As a father, I obviously identified with several of the elements and they struck a bigger nerve but I can see those complaining about not scary enough. Some of the character decisions are incredibly frustrating, and it is another thing to watch kids be dumb. But kids are dumb.

I hope more horror films start going this route. This is an indie horror movie feel that made it mainstream. The more people accept this film then the more they will begin to accept films like It Comes At Night.