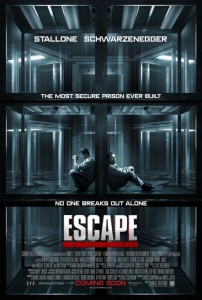 Escape Plan is a call back to a simpler time. When the biggest blockbusters were dumb as bricks and had little more to offer than some cool action scenes and one-liners that make you want to pull your eyes out. Modern blockbusters have to bring something new to the table. The Marvel and DC movies give us superheroes that can do things we can’t.

In some ways, that’s true of 80’s action movies too. The heroes of those movies know how to fight hand to hand better than a black belt, can shoot guns with 100% accuracy, and are apparently made of magnets that repel all bullets, save one or two that they shrug off like it were a bee sting. But they are still just human. Superheroes have an excuse, they are superheroes, but these are just regular, everyday guys and it doesn’t make sense. But then, what’s wrong with that?

Escape Plan begins with a cool and long sequence where our hero Ray Breslin (Sylvester Stallone) is breaking out of a prison. After the convoluted sequence ends you get a slick retooling by Breslin on how he did it and learn Breslin is a man who is hired to break out of prisons around the country to prove how easy it is and show where the prisons should bump up security. Breslin is told by his boss, Lester Clark (Vincent D’Onofrio), about a new state-of-the-art prison that is supposed to be unbreakoutable and is offered a huge sum of money. After gearing up with coworkers Abigail (an oddly cast Amy Ryan) and Hush (an even more oddly cast 50 Cent), Breslin goes to the place where he is supposed to meet his transport to the prison.

The people show up and something is clearly wrong. The transporters are more aggressive than they should be and they rip Breslin’s tracking device out of his arm. They then knock Breslin out with something out of a syringe and then boom! Breslin wakes up in a huge super prison being run by Hobbes (Jim Caviezel). He’s in a clear cage that’s suspended in air and surrounded by other inmates in similar cells. There are creepy masked guards everywhere the area is bigger than a warehouse.

When the guards get him out of his transparent cell for recreational time or something. Out in the yard, which is still indoors in a massive space, Breslin meets fellow inmate Rottmeyer (Arnold Schwarzenegger) and the two quickly hit it off and hatch a plan to get the hell out of there. The story offers a cool few twists and revelations that keep things going but it’s nothing too terribly new. It’s just an excuse to move the action forward.

The film is directed and acted well. Schwarzenegger and Stallone have some serious chemistry. So good that if they never do another film together, other than whatever myriad number of Expendables sequels that release, it will be a shame. You can tell that the two are aging though. The editors have to do some clever editing to make it seem like the stars are doing more than they are. Unfortunately they don’t really succeed. Most of the action shots are close ups and I suspect that’s to mask the fact that these guys can’t do half of what they could do thirty years ago.

Enough can’t be said about how well Sylvester Stallone and Arnold Schwarzenegger work together. Schwarzenegger is the comic relief to Stallone’s calm, deadly seriousness. The pair appear to be having fun in their roles and take whatever chance they can get to remind you why they were and always will be movie stars.